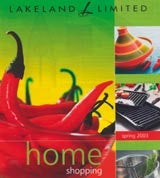 Kitchenware and mail-order stores group Lakeland is looking for a director of marketing.

Marketing chief Julian Rayner is to move into a new role, looking at business opportunities for the group.

Rayner is one of three brothers who own and run the company, the other two being managing director Sam and buying director Martin.

Julian Rayner says: “As the company grows, we have to look at strengthening the management team.” The marketing directorship will come with a seat on Lakeland’s operating board.

Julian Rayner claims that the company, based in Windermere, had sales of about &£96m last year – up 16 per cent on 2001. Sales are split fairly evenly between its mail-order business and its 25 retail stores. He hopes to see double-digit growth in 2003.

The company was founded in the Sixties by the brothers’ father, as Lakeland Plastics, supplying agricultural equipment. It later changed its name to reflect its move into kitchenware.

It uses Leeds-based Advertising Principles for media buying and Drama – part of the JDA Group – for direct marketing.