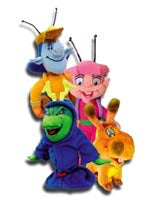 The Lampies, a children’s TV cartoon series shown on BBC2 and produced by Red Balloo Productions, is to be turned into a magazine. The brand will also appear on toys and clothing in a bid to rival Bob the Builder and the Tweenies, both of which have launched successful spin-off products.

Red Balloo Productions, which owns the rights to the Lampies brand, has also signed a deal with North County Foods to produce Lampies branded pizzas.

The monthly magazine, to be called The Lampies, will be launched on October 17, priced at £1.65. Published by contract publisher Please! Publishing, the magazine will have an initial print run of 150,000.

Red Balloo Productions managing director James Coldwell says: “The magazine is only the start – we have a number of merchandising deals already agreed and a range of Lampies products, from toys to soft furnishings, will soon be on the shelves.”

He adds: “Over the next couple of months we expect the Lampies to become a household name: people should not be shocked to hear the Lampies on radio stations across the country, or even to see the characters on Top of the Pops.”