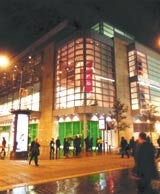 Apparently, Mancunians – and their mellifluous accent – are back in style. Now you, like the Diary, may be wondering when exactly they were in style before. No matter. The fact is, that nasal Manc whine is hotter than the Labour Party’s donations list.

Readers should be warned, however, that this puzzling assertion comes from Clocktower Creative, a production studio based in Sale. Which is quite near Manchester. So, more to the point, Mancunians are close by and cheap to employ.

But they may have a point. Peter Kay (who is technically from Bolton), Mark Radcliffe and Shaun Ryder have all been appearing in ads recently.

Clocktower puts this down to the success of the Factory Records film 24 Hour Party People, although, having seen the film, the Diary is doubtful that such an average movie can really have caused such a stir in adland.

Still, it could be worse. Liverpudlians could be back in style. Be warne

d, however: the Geordie accent is about to sweep the nation, as Big Brother returns for yet another series. Altogether now: “Ho gores? You deeciiiiide.”