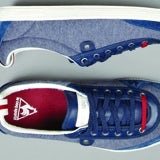 The same range of clothing and footwear available in Europe will launch in the new year, and will be the first “international range” available in the UK.

The relaunch follows a move to bring the UK subsidiary into parent company LCS International.

The brand plans to build sales through an agreement with vintage sportswear site Hanon, and through deals with several independent retailers.

A spokesman for LCS says that it has been careful in its selection of outlets and is “not in a hurry” to expand distribution.

He adds that LCS will be positioned as a “quality brand that is authentic but accessible”.

Clothing has been designed to tap into the brand’s “rich history” in sports including cycling, tennis and football. The spokesman adds that previous activity in the UK was focused on football “with not an awful lot beyond that”.

LCS will use PR and social media activity to target the range at 18- to 25-year-olds.

The sports lifestyle market is fiercely competitive with Fred Perry, Adidas, Puma and Nike among the biggest brand names.