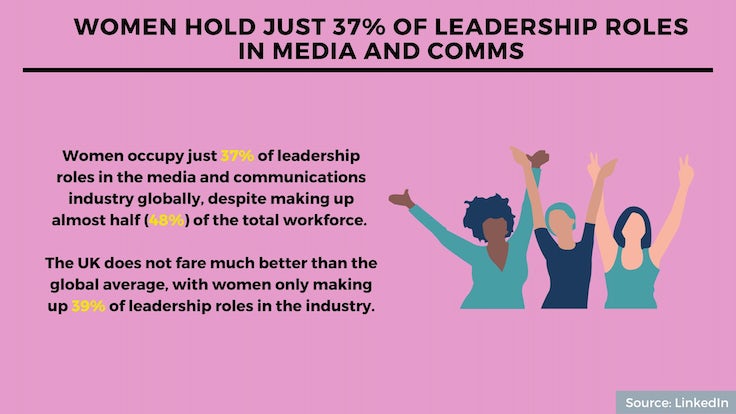 Women hold just 37% of leadership roles in media and comms

Women are underrepresented in leadership roles in the media and communications sector, according to data from LinkedIn.

The share of women in leadership in the media and comms industry represents the total number of women holding director, vice-president, C-suite or partner positions, divided by the total number of men and women holding these positions. LinkedIn’s media and comms industry filter includes roles such as marketing manager, marketing specialist and digital marketing specialist.

While globally the share of women hired into leadership positions in the sector grew 5% between 2015 and 2022, the statistics reveal work is needed to close the gender gap within leadership.

Offering greater workplace flexibility could be one route to redressing the balance, with LinkedIn data showing globally women are 24% more likely to apply for remote roles. Investing in training courses, mid-career reskilling, gender-equal candidate panels and no longer asking for prior salaries when hiring could also help women climb the career ladder, LinkedIn suggests.

Half of marketers not spending enough to get maximum ROI 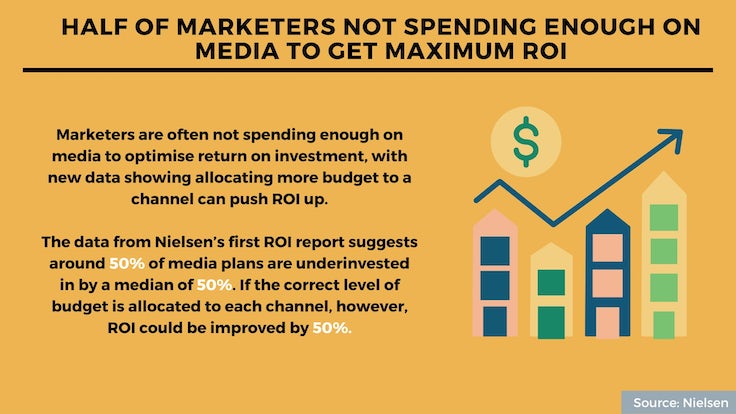 Marketers are often not spending enough on media to optimise return on investment, with new data showing allocating more budget to a channel can push ROI up.

The data from Nielsen’s first ROI report suggests around 50% of media plans are underinvested in by a median of 50%. If the correct level of budget is allocated to each channel, however, ROI could be improved by 50%.

Beyond budgeting, the Nielsen report shows it’s rare for channels to deliver above average returns for both brand and sales outcomes, with little over a third (36%) of media channels performing above average on brand and revenue metrics.

To grow ROI, Nielsen suggests brands need to take a balanced approach for both upper and lower funnel activity. The study finds adding upper funnel marketing to existing lower and mid funnel marketing can grow overall ROI by 13% to 70%.

When it comes to emerging media, Nielsen makes the point that brands often have to take gambles to see if channels will work for them, as small amounts can make it hard to see if the media is working. It finds podcast ads, influencer marketing and branded content can deliver more than 70% in aided brand recall, and that influencer marketing ROI is comparable to ROI from mainstream media. 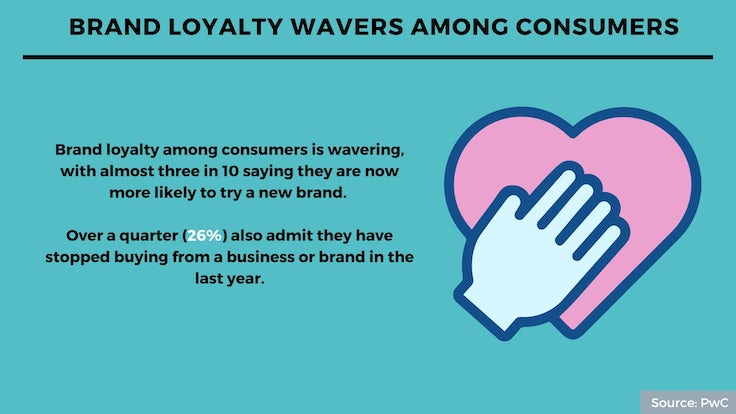 Brand loyalty among consumers is wavering, with almost three in 10 saying they are now more likely to try a new brand. Over a quarter (26%) also admit they have stopped buying from a business or brand in the last year.

Consumers are more likely to try new brands in certain sectors, with restaurants (44%) consumer goods (38%) and supermarkets (36%) coming out on top.

Inconsistency in customer experience can also turn customers off. Almost one third (32%) of respondents say they would drop a company if it provided inconsistent experiences.

Good value was found to be the most important reason why consumers use a business or brand. More than half of consumers (53%) say this is their top reason, while 30% say they like the benefits, rewards and privileges they get with a preferred company’s loyalty programme.

Marketing roles get the best perks 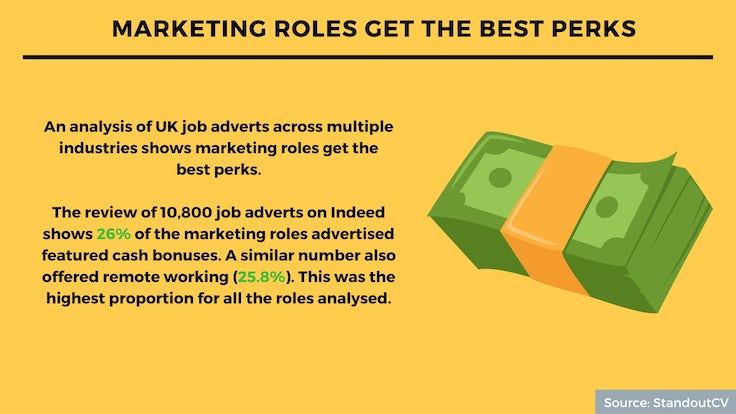 An analysis of UK job adverts across multiple industries shows marketing roles get the best perks.

The review of 10,800 job adverts on Indeed shows 26% of the marketing roles featured cash bonuses. A similar number also offered remote working (25.8%). This was the highest proportion for all the roles analysed.

Some 3.2% of marketing roles also offered paid charity days, and while this might seem like a small number, it is actually the highest proportion of the roles analysed. Across all roles, only 0.8% offer this perk.

Across the board, remote working and bonuses are offered by an average of 16.8% and 17.7%, respectively. The rarest perks offered are unlimited holiday allowance, as well as free tea and coffee, with both occurring in only 0.35% of job adverts.

Marketers are the second most likely (after accountants) to be offered unlimited holiday allowance, with 1.1% of job ads offering this.

The research finds that one in 10 (10.9%) UK job adverts list “progression” as a job perk where many would likely consider this an essential part of a role. 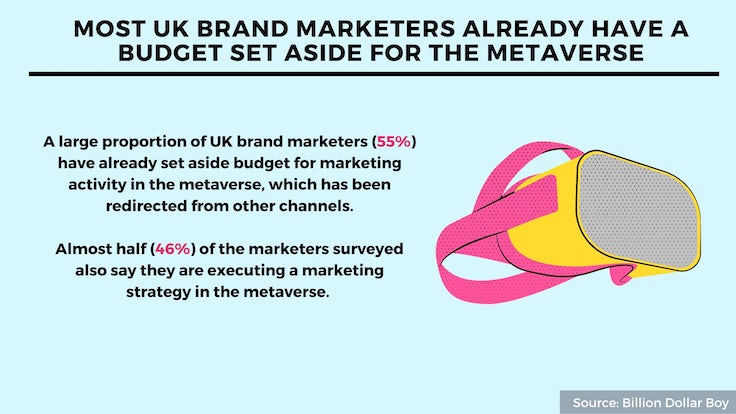 A large proportion of UK brand marketers (55%) have already set aside budget for marketing activity in the metaverse, which has been redirected from other channels.

Almost half (46%) of the marketers surveyed also say they are executing a marketing strategy in the metaverse.

Consumers’ views were also looked at as part of the study, with 40% of Gen Z respondents saying they are already active in the metaverse, while just under a third (32%) of millennials say the same.