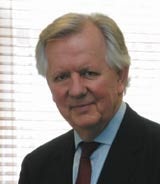 The Conservative Party has taken on Leagas Delaney to create a campaign for Stephen Norris, its candidate in next June’s election for the Mayor of London.

The agency will help Norris face the uphill task of displacing the current London mayor Ken Livingstone, who is tipped to be re-elected.

It is understood that O2 marketer Will Harris, who is said to harbour ambitions of becoming involved in national politics, acted as a consultant on the pitch while on sabbatical from the mobile phone operator.

The pitch was overseen by the former chief executive of the Conservative Party, Mark MacGregor, who began acting as Steve Norris’ campaign director earlier this year.

MacGregor first came to prominence as leader of the far-right Federation of Conservative Students, but became a fervent supporter of Michael Portillo before Iain Duncan Smith won leadership of the party in 2001.

Others in the race for the mayoral elections include Liberal Democrat Simon Hughes and Labour’s Nicky Gavron, the current deputy mayor. Livingstone is not expected to begin campaigning until four weeks before the election.