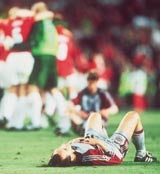 The European football governing body’s project intends to exploit the popularity of the game across Europe to discourage racist behaviour.

A European television campaign is expected to run in the ad breaks during the latter stages of the UEFA Champions League and the UEFA Cup, supported by a print and public relations campaign.

The campaign is likely to include work under UEFA’s existing “Unite Against Racism” banner, although insiders close to the deal say the tagline could be dropped for a more specific title.

UEFA will work in partnership with European anti-racism body, Football Against Racism in Europe (FARE), to develop the campaign. Piara Powar, a FARE member and director of UK anti-racism body Kick It Out, says the campaign will need to be “very creative” to communicate effectively with football fans across Europe.

Powar says: “It will need to appeal to fans from the UK to Italy and Germany. This will be difficult – football cultures vary widely across Europe, despite all the talk of a universal language of football.”

News of the European campaign will embarrass the English Football Association, which drew up a shortlist of Mother and TBWA/London for an anti-racism campaign last year but has since sidelined the initiative (MW May 29, 2003).