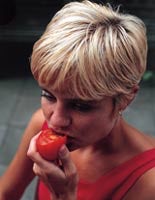 The anti-genetically modified (GM) food lobby seems to be fighting a losing battle. Research from BMRB’s Target Group Index (TGI), which has examined long-term consumer attitudes on GM food, indicates that it is older people who take the most fervent stance against the development of such foodstuffs. Younger people are far more open-minded and accepting of the suggestion that GM food is safe.

According to BMRB, 30 per cent of adults aged 15 or over agree with the statement “I would never buy food that has been genetically modified”. Of these, half strongly agree. At the other end of the scale, 24 per cent of adults disagree with the statement, 11 per cent of whom disagree strongly. Over-50s are almost 20 per cent more likely than average to agree, while 15to 24-year-olds are over 40 per cent less likely than the average to agree. Those in the AB social grades are slightly (15 per cent) more likely to be suspicious of GM food.

Regional variations in attitudes to GM food across the UK are small, although there is a slight anti-GM food bias in the South and the Midlands compared with the North and Wales. Those who are anti-GM food are almost 50 per cent more likely to do their main grocery shopping in Waitrose, and significantly less likely than average to do their main grocery shopping at less exclusive and less health food-oriented stores such as Kwik Save and Budgens.

But are people more anti-GM food now than they used to be? The short answer is no. Over the past two years, TGI data has shown a slow but fairly steady decline in the number of people who are against GM food, suggesting that resistance to it may subside greatly in the long term. In summer 2000, the data suggested that 34 per cent of adults were anti-GM food – this number has dropped to 30 per cent in the latest survey.

One might expect that those who are anti-GM food would take a very dim view of fast food, particularly as so many of them are happy to pay more for organic food and to seek out free-range products. But the surprising fact is that only 40 per cent of these consumers agree that fast food is “all junk”. They are still almost 40 per cent more likely than the average adult to be dismissive and disparaging about fast food, however. Just over a quarter of adults generally believe all fast food to be “junk”. Similarly, those who are against the prospect of GM food are almost a third more likely to agree that they “do not take any chances when it comes to food scares”. This shows that the anti-GM food lobby has more general scepticism about food quality than other people. More than half of them agree they do not take chances, whereas among all adults generally, just over 40 per cent would agree to this statement.

Marketing Week will award the writer of the best letter of the month Â£300 of Thomson Holiday vouchers provided by Landround.