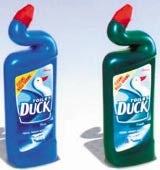 There are large banks of toilets housed in warehouses across the UK, which are being used to test toilet detergents, papers and wipes to ensure they flush away as they are supposed to.

But such tortuous testing does not always pick up potential problems, with the conditions in the laboratory unable to replicate the real trial of use in millions of homes.

But it is not the only manufacturer to have encountered problems with a product at launch that should have been picked up at the development stage. Procter &amp; Gamble’s (P&G) Charmin and Unilever’s Persil Power come to mind.

SC Johnson’s Toilet Duck toilet-cleaning pads are said to use similar technology to the Scrubbing Bubbles brand available in the US. These flushable wipes are bio-degradable, although the product still warns consumers to “never flush more than one wipe at a time” and to avoid flushing if the “plumbing is not working optimally”.

A spokeswoman for the UK Centre for Economic and Environmental Development (UK CEED), which runs the Bag It and Bin It campaign against flushable materials, warns such products present a significant risk. “If you think that even toilet paper can block the sewer, there is clearly a potential problem with these wipes,” she says. She adds that if wipes escape the sewage system, there is concern that they could pollute the environment.

One retail insider says the US products might not cope with the poor state of UK sewer systems. “The UK loo system isn’t as robust as it could be and wasn’t designed with such products in mind.”

He says SC Johnson should take a careful look at the last time a company attempted to transfer toilet products from the US to the UK. P&G’s &£27m launch of its Charmin toilet paper in 2000 turned into a disaster after rival Kimberly-Clark (K-C) claimed the product could block the sewage system (MW March 23, 2000).

One issue management expert says Charmin is an example of the dangers of rushing a product to market. He says: “Charmin was successful in the US, but P&G didn’t take the due diligence in Europe, where we have different toilets.”

And problems arise despite the fact that, as a P&G spokeswoman says, the company “meets or exceeds requirements of all environmental laws and regulations”.

One retail expert says that P&G relied on its US data and did not sufficiently test the product in real UK conditions. A K-C spokeswoman, meanwhile, stresses its products are subject to comprehensive local tests. She says: “All toilet tissue products are evaluated to ensure ‘flushability’. Different markets have different systems so, for example, we have toilet tissue products evaluated in loos in different European markets.”

The spokeswoman says external research companies also carry out research. This is standard industry practice for technical tests such as those for allergic reactions.

Fiona Spencer, international marketing director of cleaning goods maker Mapa Spontex, is one of those that uses external laboratories for allergy testing.

Spencer says development research covers every aspect of a product’s lifespan, from the moment of purchase to the point of disposal. “There is as much a duty to make sure products can be disposed of as to make them work.”

However, manufacturers admit that no testing is completely foolproof. A Lever Fabergé source admits that pre-market testing “can’t cater for everything”.

Mike Handley, chief executive of own-label manufacturer McBride, believes that the most basic tests can be overlooked, despite the millions of pounds spent on analysing minor chemical content.

But despite the most rigorous internal testing, Handley says, products can still contain flaws. He attributes this to “forced” errors arising from pressures to increase the speed to the market.

Handley adds that no amount of testing in a laboratory can duplicate the rigours of a national roll-out. McBride uses test markets in France, and often launches products with a single retailer before a widening distribution.

Handley points to Unilever’s disastrous Persil Power launch in 1994, which he blames on insufficient market testing in a bid to quickly match Ariel Future. “It was only after a few months that things went wrong,” he says. “The way to prevent this is with a small-scale launch, but companies worry about losing the edge.”

“Ultimately,” says Handley, “the importance of innovation to beat the competition means that mistakes will be made. This is part of existing in a highly competitive market.”