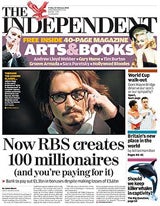 The OFT has posted an invitation to comment on the “anticipated acquisition” and set a deadline of 11 March for any concerns to be raised.

Industry observers have speculated on what kind of business model Lebedev might deploy for The Independent newspaper. After acquiring the London Evening Standard from Associated Newspapers he made it a free publication and there is a possibility he could follow a free or hybrid paid for/free model for The Independent.

There has also been fevered speculation as to whom Lebedev might install as editor in place of Roger Alton. Former Today editor Rod Liddle has been linked with the job, although he now seems to have been ruled out.