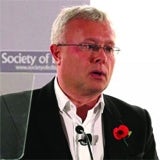 Speaking at the Society of Editors dinner in Glasgow, the owner of The Independent says the NewsCorp chairman’s impact on the UK media was more positive than negative.

Murdoch is currently trying to buy the remaining shares of satellite broadcaster BSkyB that it does not currently own.

The owner of The Independent also spoke of his days in the Soviet Union intelligence service, saying it enabled him to see the difference between what the Soviet government was telling people, compared to what the international media were reporting.

“[I realised] it was the key to a free society. It was and is a fundamental structure of a democracy.”

“It is also a defence against tyranny, corruption, injustice and, at times, can and should be a source of light, shining into the dark areas where the powerful and corrupt want to keep things hidden,” he adds.

He spoke of how his own experiences have led him to ensure he has little editorial influence over his newspapers in the UK or Russia.

“I have always pledged to keep at arm’s length from my editors in their decisions about what goes in the papers. Because journalism is a fundamental structure on which democracy and freedom of the individual is built, it is essential that the power of the media is not tied too closely to any single individual,” he says.

Of turning the Evening Standard into a free paper, the Russian owner said he was proud of what they had achieved.

“We do not have the magic formula for everyone but we hope that this will keep alive London’s paper,” he adds.

Read a profile of Andrew Mullins, managing director of The Evening Standard and The Independent, in this week’s Marketing Week.