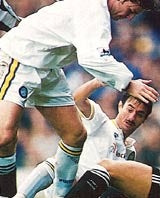 Three senior marketers from Leeds United Football Club have left in the last two months, fuelling speculation that the club is about to announce an overhaul of its commercial operations.

The Premier League club is now on the hunt for a head of marketing and insiders say it wants to appoint a heavyweight marketer who will capitalise on the club’s success.

The club refuses to comment on the circumstances surrounding the departures. It is not clear whether Cucksey and Ogg left with jobs to go to but Womack is now head of Golf at HN Sport, a subsidiary of the Sportsworld Media Group. Leeds United also refuses to comment on whether the vacant posts will be filled or whether the head of marketing post is to replace all of them.

Pearson was an influential figure at Leeds, where he negotiated more than &£20m of sponsorship deals.

The Accident Group, the personal injury compensation company, is to sponsor injury time at Leeds’ home games. The sponsorship was created and negotiated by Sportsworld Media Group.

Marketing Week will award the writer of the best letter of the month 1,000 buy and fly! points, equivalent to a return flight for two to Paris or similar European destination. Entrants must be over 18; no employees of Centaur or buy and fly! may take part; the editor’s decision as judge is final; there […]

Thistle Hotels has signed a three-year deal with giant poster contractor BlowUP Media to build and sell large advertising hoardings at all of its 56 UK properties. The European poster company was set up in the UK last year and already has a contract to erect giant posters at most NCP car parks. This latest […]