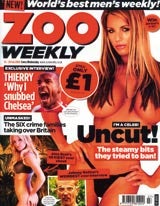 As the Audit Bureau of Circulations (ABC) announced its figures for the second half of 2003, the magazine industry was abuzz with rumours that the sector is to embark on a frenzy of launches similar to that of the Nineties. Although the market has experienced only a marginal increase of 1.6 per cent in year on year sales, pundits are predicting launches in the celebrity sector as well as a spate of women’s titles – suggesting a bright future for British magazines.

The two most recent launches – IPC Ignite!’s Nuts and EMAP Consumer Media’s Zoo Weekly – have spawned men’s weeklies and appear to have spurred the industry to greater efforts. It is thought that EMAP, IPC Media and Richard Desmond’s seemingly unstoppable Northern &amp; Shell will be adding more titles to the shelves. Meanwhile, existing titles are being overhauled in order to sustain circulation figures.

In the women’s lifestyle and fashion sector, IPC Southbank’s Marie Claire is in need of a facelift after suffering a decline of 9.8 per cent year on year and 4.2 per cent period on period, to a circulation of 360,789.

The title, once hailed as the intelligent read for women who want fashion and hard-hitting reports on the lives of women around the globe, managed to sell fewer than 300,000 newsstand copies in July to December 2003.

IPC Southbank managing director Sandy Whetton blames the dip in sales on the reduction of cover-mounts. “We are caught up in an industry cover-mount war, which in the long-term cannot be particularly good for business. But it is vital to ensure Marie Claire retains its unique readership profile, and Marie Claire is the only title that has increased its key 25- to 34-year-old readership,” he adds.

The industry agrees that many publishing houses rely on bulk sales, fantasy overseas sales and free cover-mounted gifts to achieve respectable ABC figures. But press buyers say that the problem with Marie Claire is not the reduction of cover-mounts, but the product itself.

OMD UK press director Adam Skinner says: “The fact that IPC is saying it has taken the decision to cut down on cover-mounts and hence the declining circulation, smacks of under-investment in the product. It is a shame that a brand such as Marie Claire is losing its way.”

With the title’s newsstand sales sliding by 10.1 per cent year on year and 6.1 per cent period on period, such misgivings are not unjustified.

Elsewhere in this sector, Condé Nast’s Glamour continues to outshine rivals with a circulation of 582,690 – an 8.4 per cent year-on-year increase. The magazine is expected to hike its price from &£1.80 this year, which is likely to have a positive impact on its rivals – all of which are slightly more expensive than Glamour. Its nearest rival, National Magazine Company’s Cosmopolitan, suffered a slight dip of 0.5 per cent year on year and 0.3 per cent period on period to a circulation of 460,655.

In the mature women’s sector Red, She and Eve all posted increases both year on year and period on period. The rise of 3.9 per cent in the last period and 2.1 per cent in the year to a circulation of 415,730 for NatMags’ Good Housekeeping demonstrates the growth in the more traditional magazine sector.

Jenny’s on the block

Meanwhile, Good Housekeeping’s 34-year-old sister title Harpers &amp; Queen, once considered the la-di-dah title for the rich and famous, is also being given an overhaul. With a circulation of 90,227, more than 5,897 copies ahead of its nearest rival Tatler, Harpers &amp; Queen is being plugged as the read for a slightly younger woman, who earns enough to afford to buy the products featured in the magazine. In a significant move it has dropped its social page, Jennifer’s Diary, from its March issue, which features pop star Beyoncé on its cover.

NatMags group publishing director Tess Macleod Smith says: “The magazine is intended to be the first-stop shop for the modern woman. The magazine will feature Glastonbury and the Brit Awards rather than the Ascot to get those readers on board.”

This sector is waiting with bated breath for the launch of a new magazine from EMAP, which lost its Elle and Red titles to HF UK in 2002. The French company won the rights to publish both Red and Elle after the HF-EMAP joint venture was dissolved. Both titles were part of EMAP Ãâ°lan, publisher of New Woman, which recorded an ABC of 290,533 – up 5.4 per cent period on-period but slightly down year on year, by 1.4 per cent. Losing Red and Elle created a gaping hole in EMAP’s women’s portfolio.

Dawn Bebe, managing director of EMAP Ãâ°lan’s women’s titles, says: “After the loss of Elle and Red, EMAP has been left without a heavy-hitter in its portfolio in terms of brand.” No details are being unveiled by EMAP at this stage but it is assumed that EMAP will work to fill the gap in its portfolio.

Richard Desmond’s New! – launched as a “me-too” in March last year to rival IPC Connect’s Now magazine – suffered a circulation decline of 1.4 per cent period on period. Critics of Northern &amp; Shell say that Desmond’s stable of three celebrity magazines benefits from aggressive cross-promotion with New! and Star being given away free with OK! magazine. Star, launched in November, is being cleverly promoted as 45p cheaper than Heat!, confusing some readers into thinking it costs just 45p, when in fact it costs &£1.50. Its stablemate New! costs 60p. MediaCom press director Claudine Collins says: “The celebrity titles are starting to eat into each other’s market share, and the sector will continue to be led by price promotions.”

Hello!, meanwhile, has suffered another set of disastrous results, following its decision to axe all bulks and free give-aways, with a total circulation of only 350,374 – a decline of 35.9 per cent year on year. This compares with a 9.8 per cent year-on-year slide for rival OK! to 570,927, which includes only 460,678 actively bought copies.

The men’s monthly sector, which in recent times has been faltering, was a surprise star performer. EMAP’s Arena, the upmarket men’s title, soared 28.1 per cent year on year to 40,617.

Esquire, which has reverted to the tried-and-tested format of titillation after the departure of editor Peter Howarth who had banned “tits and arse”, also posted a positive headline circulation figure of 70,164 – up 3.1 per cent year on year.

The figure includes 20,000 bulk sales, which according to group publishing director MacLeod Smith is largely accounted for by an exclusive deal with British Airways. Jack’s circulation increased 17.1 per cent period on period. The title was sold by James Brown to Felix Dennis last May and has since adopted a larger format and increased its pagination.

Of particular interest in the next round of ABCs will be the impact of Nuts and Zoo Weekly. Industry pundits are already predicting the new men’s weeklies will have the might to steal sales from the established monthly magazines.

Head of teen titles at HF UK Lisanne Currie says: “The fact that Cosmo Girl has done so well proves the market is not in decline. For Sugar, we have great plans this year: we are looking at refreshing the product and the cover-mount offerings.”

Industry insiders suggest that Sugar is to be revamped completely to compete with Cosmo Girl, but Currie plays down the title’s circulation decline saying that last year was one of the most successful years for the magazine.

The teenage market has seen much activity between July and December, with the launch of Dare from BBC Magazines and Sorted, a teen title for boys. Also, HF UK has moved the frequency of ElleGirl to monthly. Though the sector has yet to return to its glory days, any new launches will not come as a huge surprise.