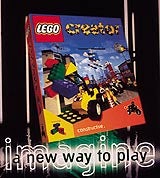 His departure is understood to have followed a disagreement with Danish bosses over the toy manufacturer’s marketing strategy.

Carpenter, who joined the company in 1989, was understood to be unhappy with decisions made by his superiors at Lego’s global head office in Denmark.

A Lego UK insider says: “Carpenter was unable to resolve his disagreements with bosses in Denmark about our approach to marketing. He was unhappy with our approach, while the Danish office considered it the right direction to take.”

Carpenter will be replaced by vice-president of special markets Soren Torp-Laursen, who is based in Denmark. He has been responsible for developing untapped markets, including those in Russia and eastern Europe.

Torp-Laursen is expected to relocate to the UK and will have a series of brand managers reporting to him, each responsible for a Lego product.

In another development within the Lego group, Petra Bedford has been promoted from head of marketing in Europe and Asia to the new post of marketing director at Lego Media.

She will be responsible for marketing Lego’s video game and computer software interests. Bedford will report to Lego Media managing director Mark Livingstone.