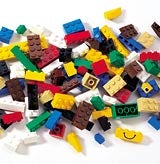 Lego is rebranding its product range and introducing a new slogan to simplify what the Lego brand stands for.

The toy company says that in the past, consumers have been confused by the different sub-brands, such as Lego Technic, Duplo and Primo, and not realised that they were all part of the Lego group.

From January 3, all products will be grouped under four new categories – Explore, Make &amp; Create, Stories &amp; Action and Next – rather than by age range, and be represented by their own set of colours. The exception is Explore, which is exclusively aimed at the pre-school group and was released in August this year.

At the same time, a new slogan called “Play onÂ”, will come into effect, replacing “Just ImagineÂ”. It is meant to represent the five values behind Lego: creativity, imagination, learning, fun and quality. According to Lego, the old slogan only emphasised the imagination aspect, whereas “Play onÂ” is meant to relate to imagination and applying that imagination to creating things.

The global brand strategy was created by a taskforce set up by chief executive Kjeld Kirk Kirstiansen and chief operating officer Poul Plougmann. The company also plans to open a chain of branded stores, beginning with one in Cologne and a second in Milton Keynes.