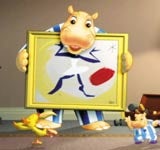 The account was put out to pitch in May after Silentnight, the UK’s largest bed manufacturer, ended its relationship with Mortimer Whittaker O’Sullivan (MWO) after five years.

MWO was awarded the account in May 2000 with a brief to return the Silentnight brand to television after an eight-year absence. It brought back the hippo and duck characters, synonymous with Silentnight and created by Manchester’s BDH/TBWA in 1987, as cartoon characters.

Two years ago, it created a TV campaign to support the launch of the My First Bed range of children’s beds (MW April 17, 2003).

BDH/TBWA and Beattie McGuinness Bungay are believed to have pitched against Leith London. The agency is to develop a TV- led campaign for the Silentnight Beds brand, which is expected to air in the new year.

The hippo and duck characters will remain, although the brand is expected to be repositioned. New products are also expected to be added to the portfolio.

Whittaker is joining Leivers to work strategically across the brand portfolio, which includes the Sealy and Layezee bed ranges.