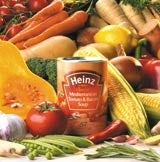 Heinz has appointed WCRS to a health and nutrition master branding project in a move that strengthens the agency’s grip on the account.

The campaign will focus on the food giant’s &£10m soup business, which had previously been handled by Leo Burnett.

It is understood that Heinz was unhappy with Leo Burnett’s work on the relaunch of the soup portfolio last year and that the company believes that the relaunch failed to make the hoped-for impact.

The company invested &£10m in the overhaul of its soup range last year, introducing new recipes and flavours and new packaging. The move was given extensive marketing support (MW August 12, 2004).

WCRS has been increasing its grip on Heinz’s advertising in recent years. It won the baby food portfolio in 2001, following a competitive pitch, and has shared the &£4m frozen food account with Leo Burnett.

The agency has also been working with Heinz on its Good Food Everyday campaign, which promotes the company’s health and nutrition credentials.

Heinz vice-president of brands Scott Garrett says the Good Food Everyday campaign is a WCRS assignment and that the campaign will feature the soup range for this year at least.

Burnett will continue to handle the rest of Heinz’s canned food range, including baked beans. It also handles sauces, microwave meals and Weight Watchers by Heinz.

WCRS declined to comment as Marketing Week went to press.