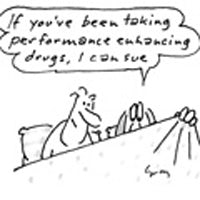 Allow me to introduce you to Matthew Mitchell. I cannot tell you much about his personal details, only that he is 30 years old, works as a paralegal, lives in a Brooklyn, New York, and, most germane for our purposes, is a baseball fan.

But these few sketchy details notwithstanding, Mr Mitchell has the makings of a trailblazer and we should follow his progress with interest. For his example, as we shall see, might profit us in many ways, not least financially and politically.

His enthusiasm for baseball began in 1984 when at the age of six he went to his first game at Yankee Stadium. It sparked a devotion to the New York Yankees which proved enduring, though not, alas, permanent. Safe to assume that whatever the fortunes of the boys from the Bronx, he was there, week in week out, cheering them on, exulting in their triumphs, commiserating in their defeats. And then one black day not long ago the love affair ended as suddenly as it had begun. It was as if the object of his adoration had torn away a mask revealing beneath a hideous visage from which he recoiled in horror.

His Yankee heroes, he discovered, were a sham. The oomph and biff he had so admired from the bleachers, causing him to scatter popcorn and shower Coke in his wild joy, were the product not of athletic ability but of banned substances. It transpired that no fewer than 20 current and former Yankees were stuffed to the bubbling eyeballs with steroids and other “performance-enhancing formulations”.

Mr Mitchell felt cheated. One imagines that the devotee of a pole-dancing establishment would feel much the same were he to discover that the eye-popping charms of his favourite artiste had been bought over the counter from Boots and fitted by a cosmetic surgeon found in the Yellow Pages. Somehow, the magic would have gone.

But Mr Mitchell is an American paralegal and Americans know that the law is on their side, ever ready to come to the aid of a distressed citizen with a few bucks to spare. Some believe the USA’s motto is “E Pluribus Unum”; in fact, it is “When in Doubt, Sue”, and Mr Mitchell is suing. He has filed a lawsuit in a small claims court saying he wants repayment for £112 in tickets and a public apology from the Yankees.

“I look at it almost as consumer fraud,” he says. “If I am going to watch a baseball game, then I expect it to be the real thing.”

Shrewd lawyers on this side of the Atlantic will be watching Mr Mitchell’s progress with interest, for come 2012 there could be money to be made. Two things about the forthcoming London Olympics are certain: first, the cost of staging the event will be far greater than currently estimated (my guess is that the final figure will be about £15bn) and second, an untold number of competitors will, like the New York Yankees, have more chemicals flowing through their veins than the Xiangjiang river has effluent.

Already, the estimated budget of £2.4bn has risen fourfold, that’s in just 20 months, and a few days ago we learnt that the Department for Culture, Media and Sport had based the arithmetic on which it proposed to repay money plundered from the National Lottery on the assumption that the value of land bought for the Olympics would increase by 20% a year.

Last week, like a costermonger drawing attention to his globe artichokes, the Culture Secretary James Purnell (he’s the fellow whose photo was pasted into the picture of an event at which he arrived late) declared that the Olympics were cheap at the price. They would, he yipped, be the best Olympics ever and inspire a generation.

Well, we’ll sit on our hands, waiting patiently. And when the time comes, the athletes are departed, the creepy Lord Coe slunk back into the shadows, the ridiculous Tessa Jowell restored to her shell, we shall pounce. Following the example of Matthew Mitchell we shall sue. We shall point out that this high jumper was drugged, that pole vaulter was high on something other than a pole, and the entire Ruritanian synchronised swimming ensemble were so full of needle holes you could have used them to water your onion sets.

When we go to an Olympics, we shall say, we expect it to be the real thing. Give us our money back. Not just the ticket money, the whole £15bn. Plus interest.

There is, I admit, a weakness in the case. It could be argued that drug-fuelled Olympics are the real thing, but we’ll keep quiet about that.

The AA has accused the Government of leading motorists down “blind alleys” by “chopping and changing” its policy on alternative fuels and environmentally friendly vehicles.

Cadbury is introducing Creme Egg as a permanent line with the launch of a new bar called Creme Egg Twisted. The launch aims to boost sales of the brand outside its core Easter period. The new product is a solid bar of chocolate that is “twisted” and has the fondant running straight through the middle. […]

With a growing number of retailers bemoaning the lack of new product development in the soft drinks market, it is little wonder that all eyes are on Suso, a new carbonated drink made with 100% fruit juice being launched by former Red Bull managing director Harry Drnec. Suso is being rolled out across the off-trade […]