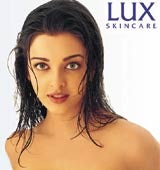 Lever Fabergé is preparing a &£20m UK launch of a washing and bathing range under its Lux brand next year.

Although Lux is one of Unilever’s 400 “power” brands, it has largely disappeared from the UK since its heyday in the Seventies and Eighties.

The brand will be launched in May, and will be supported with an ad campaign created by J Walter Thompson. It will offer a complete range of washing and bathing products including soaps, shower gels and bath products.

Lever Fabergé already markets the Dove brand in the washing and bathing category but Lux will be positioned as a premium-priced brand aimed at the high end of the market.

One source says: “The launch will be huge. Lever hopes to have the washing and bathing category sewn up with Dove and Lux as it has the deodorants markets with Lynx, Sure and Impulse.”

Marketing is expected to centre on the tagline “brings out the star in you”. The brand has boasted celebrity endorsements in the past from Demi Moore, Michelle Pfeiffer and Linda Evangelista. Lever Fabergé’s advertising account is shared between Ogilvy &amp; Mather and Bartle Bogle Hegarty; media is handled by Initiative Media.

One industry insider says consumers initially will be slow to take up the new range. “If people remember the brand at all it will be as a Seventies bathing range, which is not the best start. But it can’t really fail given the amount of money behind it.”

Boots retail marketing director Mark Johnson, who arrived to take up the role last month, is understood to be on sick leave and will not to be attending the final round of the pitches for the retailer’s ad account – leading to increasing speculation about his future at the company.

It’s not often the Diary sympathises with hippies, but this is one of those times. In 1969, John Lennon and Yoko Ono staged a “bed-in”, in a protest against the Vietnam War. In 2003, someone else has been staging a bed-in. Look. Here they are. Perhaps these people are drawing attention to repressive regimes in […]