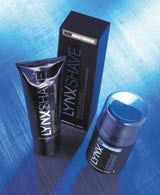 Lever Fabergé is extending its Lynx deodorant brand to the skincare market, with the launch of a moisturiser for men later this month.

The launch will form part of the &£10m revamp of Lynx, which was announced earlier this year (MW February 28). The move sees the largest investment in the brand since its launch 17 years ago.

The deodorant will be launched on May 20, alongside Lynx Post-Shave Soothing Gel. Both products will retail at &£3.99.

Brand activation manager Jo Teasdale says: “The market for male facial products has grown in value by 28 per cent, to &£18.4m, in the past year. The shaving products have been designed and priced to create an aspirational, yet affordable, entry point for new users.”

The two new products will be supported by a TV and press campaign, created by Bartle Bogle Hegarty.

Lever Fabergé will be introducing new packaging for the whole Lynx grooming range, with what it claims will be “slicker packs and clearer descriptors”.