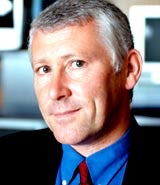 LG Electronics has promoted sales director John Lougher to sales and marketing director as part of a major overhaul of the brand in the UK.

Lougher joined the company last year as sales director, after 12 years with GDA Applied Energy, where he was commercial director.

LG Electronics is reviewing its £7m creative account for the first time in six years and is to see pitches from six agencies this week. Incumbent FCA! resigned the account due to conflict of interest after being incorporated into parent company Publicis earlier this year.

Lougher says that the review gives the company the opportunity to look at how the brand is positioned in the UK.

“Last year was our most successful yet. I would rather be working on raising the brand profile on the back of the good products we have than having a good brand profile and bad products,” he says.

As part of the brand exercise Lougher says the company has increased its marketing spend “significantly” in the UK and will concentrate on sports sponsorship deals this year. It has already signed a £7m, three-year deal with Leicester City Football Club.

The company has also signed a £1m sponsorship deal to cover this year’s Snooker Grand Prix, offering the company 37 hours of television coverage.