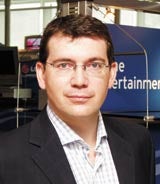 LG Electronics is seeking a marketer for the UK following this week’s departure of general marketing manager Nigel Couzens. He was due to leave the consumer electronics company on July 14 to pursue “other interests”.

His decision to leave comes in the middle of an overhaul of the company’s marketing services, during which its advertising, media and PR will be reviewed. The company is understood to be close to announcing the results.

It spent &£1.3m on advertising in the UK last year but is understood to be planning to increase its budget as part of the marketing review.

The company is keen to improve brand awareness in the UK and to build its share of the mobile phone hardware market. It is understood to have invited incumbent media agency John Ayling Associates to repitch, but not the incumbent creative agency, Mustoes.

He has been overseeing the marketing across LG’s four divisions – home appliances, home electronics, IT and air conditioning. He was also responsible for its corporate marketing, such as sport sponsorships, including last week’s Formula 1 event on London’s Regent Street.

Couzens has held a variety of marketing roles at consumer electronics firms such as Miele, Mitsubishi and Motorola.

He is planning to take some time off before seeking a new position in the consumer electronics market.