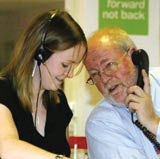 With just days to go before the General Election, opinion polls suggest that this will be the closest battle between the Labour Party and the Conservative Party since 1992. Both sides are adopting aggressive marketing techniques, such as telemarketing to people who have chosen to opt out of receiving unsolicited calls.

The Conservatives are using call centres to target voters who have signed up to the Telephone Preference Service (TPS), a register of people who have opted to block unwanted marketing calls (MW last week). This form of marketing is widely regarded as being part of the changes brought in by Australian political strategist Lynton Crosby, who recently masterminded victory in the Australian election for John Howard’s right-wing Liberal Party.

Not to be outdone, Labour is also making heavy use of call centres, claiming it is asking about the voting intentions of the electorate.

The Conservatives’ call-centre headquarters are based in Coleshill in the Midlands, while Labour’s nerve-centre is in Gateshead in the North-east.

Though both parties insist that telemarketing is not illegal, the Liberal Democrats have raised these activities with the Information Commissioner’s (IC) office, the independent government body that oversees the Data Protection Act 1998. Liberal Democrat chairman Matthew Taylor has asked the IC to investigate whether the two parties are breaking the rules if they fail to obtain voters’ permission before targeting them in a campaign.

Labour Party chief press and broadcasting officer Adrian McMenamin refuses to be drawn on the “Liberal Democrats’ smear campaign”, instead adding that the party call centres work from a pre-written script, which asks people about the type of issues that concern them and which party they are likely to vote for. He says: “The first time we call we ask which party they would support, followed possibly by a mailer. This is fundamentally not illegal. But we do also ask the individuals if they would be happy to be contacted again.”

But McMenamin reveals that though it is illegal for paid party workers to canvass those who have opted out of cold-calling, volunteers can work “off-script”. He refuses to give any further details and adds: “We are now talking hypothetically, but it is not illegal for unpaid volunteers to start canvassing people over the phone.”

Cynics say that such electioneering extends beyond legitimate boundaries because these huge telemarketing operations are simply canvassing opinion. One Labour-supporting marketing expert explains that this kind of campaigning is being used not to hunt for party supporters or even those who will vote for the rival party, but to help identify people who can be persuaded to switch support if approached in the right manner.

An IC spokesman concedes that though the office has received only “half a dozen” complaints so far against political parties making unsolicited calls, the problem it faces is proving any systematic abuse. In case of any proven violation of the Data Protection Act 1998, the IC can fine the political parties a maximum of &£5,000. “I can’t remember a time when this fine has ever been imposed,” he says.

The spokesman adds: “In our view, market research polls of voter intentions do not constitute direct marketing and are therefore permissible even to those registered with the TPS. But calls making an appeal for funds and support constitute direct marketing and therefore cannot be made without prior consent. Also, if these calls were followed by a knock on the door or a leaflet through the letterbox, then that is a breach of regulation.”

While political parties are managing to find ways around the data protection legislation to target those who have opted out of cold calling, it is much harder for commercial businesses to do so. As one marketer states, it is extremely difficult to market products and wares to a consumer under the guise of “pure” market research.

But the Liberal Democrats are not prepared to let the issue lie and have launched a website – stopnuisancecalls.com – championing the rights of consumers to block cold calling from politicians. The party has also condemned the Scottish National Party for using Sir Sean Connery’s voice in its phone campaign to raise support. The SNP is reported to have targeted 500,000 households with pre-recorded messages from the actor. The Liberal Democrat press office insists that its call centres are primarily used for fund-raising, and that no calls are made to those registered on the TPS list.

A spokeswoman for the Conservatives reiterates that its call centres do not try to “push-poll” and only give out information about what the party can offer. She adds: “There is a grey area between what constitutes campaigning and what is pure information.”

By definition, “push-polls” are not polls at all, but calls that attempt to persuade a voter, usually by pointing to the possible disastrous consequences should they vote for a rival party. A so-called “legitimate” survey is concerned with discovering what people think, rather than persuading them who they should vote for.

Ben Rich, a former Liberal Democrat policy committee vice-chairman and currently a partner at the Luther Pendragon consultancy, agrees. He says that one of the most disturbing political campaign tactics is the use of telemarketing calls masquerading as a legitimate opinion survey. “If you have the resources then it is not hard to play dirty. The problem is that this telemarketing technique is not illegal, but it is certainly unethical.”

While it seems unlikely that any of the battle-weary political parties will be hauled over the coals for adopting dirty tricks, the public may find themselves being duped by yet another clever marketing exercise.