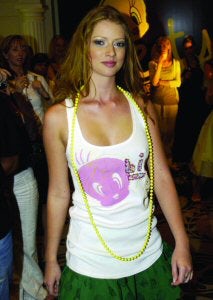 There was a time when brand licensing was synonymous with products aimed at children, but times change and the focus appears to be shifting to the potentially more lucrative adult category.

Even companies such as Disney and Warner Brothers, usually associated with children’s products and brands, are turning their attentions to older consumers. For instance, Warner Bros Consumer Products is relaunching Looney Tune’s Tweety Pie (MW August 3). David Binnie, WBCP general manager, explains that Warner felt the character needed revitalising and that by repositioning Tweety as a fashion icon aimed at adult women, WBCP hopes to generate a sense of aspiration.

“We are not targeting the default, natural consumer for Tweety as we want to make the character aspirational,” he says, adding that while Tweety Pie retained its popularity in continental Europe it has lost ground in the UK. In the late 1990s, Tweety was the biggest intellectual property in the UK for WBCP, with retail sales at the time of about 120m.

Grown-up Lead
He believes that by targeting young adults, children will follow the lead. He says that for licences to truly succeed the adult category is a key target market.

This is a strategy that Disney has adopted with characters including Mickey Mouse and one that has proved successful. But it is not just about revamping existing properties once focused on the children’s market. One property that also has adult consumers in its sights is the RAF.

The RAF livery and logo – the red, white and blue roundel – so beloved of Mods in the 1960s is making a comeback. A range of products licensed by 4Kids Entertainment International aims to express brand values of excitement, innovation and technical excellence. JOI is rolling out a men’s range including flying jackets, while-talkie sets are available from Motorola. A range of video games, developed by Myriad Interactive, are also being released.

Meanwhile, a range of DIY manuals for aircraft such as the Spitfire and the Lancaster as well as modern aircraft is being rolled out by Haynes Publishing, which has successfully embarked on an extension programme that has seen it move beyond car manuals.

Haynes is developing its own brand-licensing programme building a publishing range beyond the RAF, which includes The Official Formula 1 Season Review, MotoGP and Top Trumps.

Haynes success is in part due to consumers’ desire for nostalgia, but it is not the only the brand that is cashing in on the trend for all things retro: film brand Hammer is tapping into the now grown-up audience who were thrilled by the films in their youth. Hammer, licensed by Coolabi, is rolling out adult lines including clothes from designer Gresham Blake. Hammer is also looking to the games sector to attract the adult audience.

So why the interest in adult-focused licensing? Some observers point to the “Playboy effect”, saying that the success of the Playboy licence in targeting young adults has prompted others to follow.

Nostalgic Message
Bob Salmasi, partnership relationship director at The Marketing Store believes that creating licence driven campaigns that engage adults is difficult, but adds: “Adult audiences tend to respond well to licences that have strong nostalgia, humour and lifestyle messages. Brands are increasingly looking for ways in which they can develop dialogue with their customers and many have chosen to create their own properties. After all, if you are going to invest in a property you might as well own it.”

He cites the success of Orange Wednesday from the France Telecom-owned telecoms giant. He says: “Orange now ‘owns’ cinema. Many brands would love to own such a property but very few are actually prepared to write the kind of cheques that are required.”

But licensees are working hard. For instance, Copyrights Group is rolling out Rough Guide-branded products including sports and leisure equipment, luggage and clothing, and a range of homewares for the Marie Claire brand.

Copyrights marketing executive Kathleen Caper says: “We are seeing growth from some very strong brands from the publishing sector, such as Rough Guide and Marie Claire. This is because they have focused on what they are about and have built strong relationships with their customers.

“Readers rely on these publications for developing their opinions and in the case of Marie Claire, it has a very strong resonance with designer fashion so a homewares range fits very well.”

Attractions include:
The Screening Suite (by invitation only): Major film studios will present teasers, trailers and licensing opportunities for forthcoming movie properties
Advice Centre: A chance to receive consultations with professionals in the industry
Live Events Stage: Showcasing apparel ranges, character appearances and demonstrations
Conference and Workshop Programme: An educational programme alongside the exhibition.