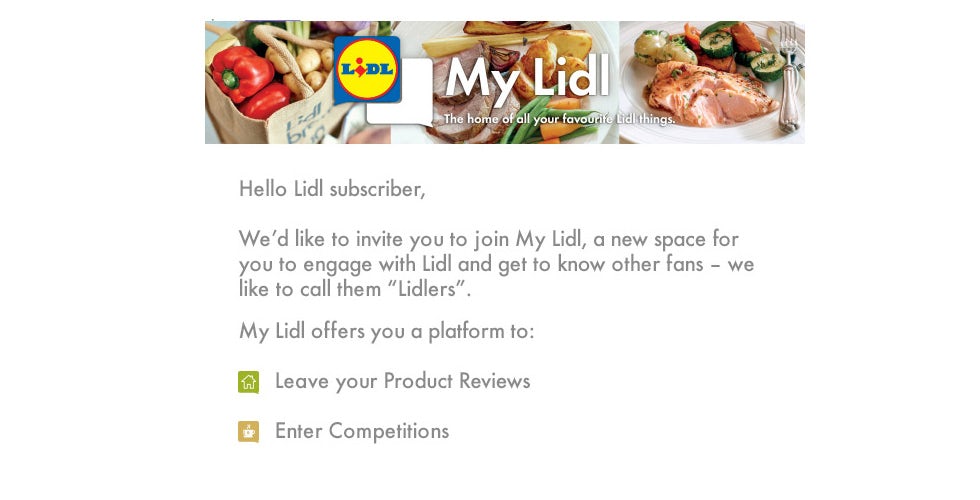 My Lidl, which launched this week, gives subscribers exclusive content from its resident chef Kevin Love, an area to leave product reviews and a forum to share recipes and shopping suggestions with fellow Lidl customers.

The service also has a rewards element, with competitions and product sampling regularly offered to its subscribers. The website also has a blog, suggesting Lidl will become more of a content creation brand.

A Lidl spokeswoman told Marketing Week: “We’re extremely excited about the launch of our new online community ‘My Lidl’ to the public and welcome new members to join. The platform is dedicated to our loyal ‘Lidlers’ allowing them to chat, leave product reviews and stay up-to-date with the latest news from the business.

“We also offer exclusive content from our chef-in-residence Kevin Love, all the latest news so that our Lidlers can always stay ahead of the game, and the occasional competition to give users the chance to win some Lidl goodies.”

Lidl’s former marketing director Arnd Pickhardt first revealed to Marketing Week that the discounter was working on a loyalty-based website back in in October 2014. Although he insisted at the time it wasn’t a bid to collect more data on customers.

“Of course if we have a community and people log-in then we know more about them. But we have managed quite successfully so far without this and there are no plans to deliberately focus on collecting data,” he said of the scheme.

In August 2015, it also trialled a 10-week ‘smarter shopping’ reward card in its Scotland stores. Although it insisted the card, which was distributed to five million consumers, wasn’t a loyalty offering at the time.

Could Lidl’s growth come at a price?

Lidl saw its sales rise 18.2% in the 12 weeks to February 28, according to the latest Kantar Worldpanel data.

Its market share rose 0.7 percentage points to 4.2%, which meant Lidl maintained its position as Britain’s fastest growing supermarket for the sixth consecutive month.

However, its planned rapid store expansion strategy and adoption of schemes such as ‘My Lidl’ could come at a cost, according to Sainsbury’s boss Mike Coupe.

Speaking at Mumsnet’s Mumstock event this week, Coupe said that Aldi and Lidl’s bid to become mainstream grocers will have a negative impact on their low prices.

“Expanding their fresh food offer or going online, it will mean they won’t be able to maintain their prices. Their prices will be hit eventually.”