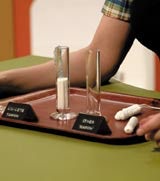 Lil-lets, the sanitary protection brand owned by Accantia Health &amp; Beauty, has awarded its &£1.5m creative account to the London start-up agency Us.

The media, through PHD, is unaffected by the decision.

It has emerged that Us has already started working on other Accantia brands, including the Simple skincare range. The start-up agency, founded by ex-HHCL &amp; Partners staff Mark Howard and Jo Tanner, has created a national television ad for Lil-lets which goes on air this week.

The advert, which claims to be the first of its kind to demonstrate a tampon’s absorbency, has won approval from the British Advertising Clearance Centre to compare the brand with its competitors.

Accantia bought the Simple and Lil-lets brands from healthcare company Smith &amp; Nephew in July 2000, as part of a management buy-out (MW July 6, 2000). The Simple range was extended into the men’s market last June when it launched Simple Skin Defence for Men.