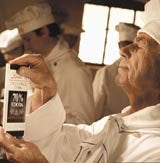 Premium chocolate brand Lindt is reviewing its &£2.5m advertising account. It is understood that the brand has already parted company with its last agency of record, Bartle Bogle Hegarty (BBH).

The chocolate brand is thought to be in the early stages of a review and it is not known which agencies have been contacted. Lindt, which is owned by German parent company Lindt &amp; Sprungli, appointed BBH to its account in July 2002 after a four-way pitch against Banks Hoggins O’Shea/FCB, Banc and Saatchi &amp; Saatchi. The account has been lying dormant for the past 18 months.

The brand’s decision to review its advertising comes just weeks after rival luxury chocolate manufacturer Godiva hired HHCL/Red Cell to relaunch its brand in Europe and Japan (MW March 25). It is understood that Godiva is looking to aggressively take on brands such as Lindt.

A number of mainstream confectionery companies are also developing premium products. Nestlé Rowntree has relaunched its premium range, Double Cream (MW October 2, 2003), which is made from Ecuadorian cocoa beans and is marketed as an indulgence product.

Cadbury is also moving into this market with the launch of two luxury gift products, Roses Luxury Collection (MW April 1) and Flake Moments. The two products aim to take on competition from the premium end of the market.