The brand has launched an app that helps blind people know when someone is smiling at them. Designed and built by its creative agency J. Walter Thompson, the app uses facial recognition and a phone’s camera to detect a smile from up to five metres away and notify the app user with a vibration or a beep.

The app is being promoted by a short film, “Feel Every Smile”, directed by Oscar-nominated Lucy Walker, herself partially blind. It stars four blind people talking about smiles and what they mean to them.

They are then given the “smile detector” app with the film following their reactions as they experience someone smiling at them, sometimes for the first time in years.

Listerine will promote the app and the film through its own digital and social media channels. The app has also been endorsed by the RNIB which will also promote it and ensure it is accessible to blind and partially blind people.

Speaking to Marketing Week, Listerine’s brand director Alice Lovell said the brand is looking to move away from the “white smile idea” so prevalent in oral care to focus more on what a smile means and its impact on those around you.

“Rather than the whiteness of the teeth we wanted explore the impact a smile has. People can see a smile from up to 100 metres away and it can have a real impact. We wanted to bring that to life in a real and positive way,” she said.

“We want to champion the power of a smile to have a positive impact on people’s lives.”

The app coincides with the launch of Listerine’s Advance White mouthwash, which Lovell said is aimed at a younger audience.

“We wanted to talk in their space online and bring something heartwarming and thought provoking. It is important as a brand to do something that has a positive impact which is why we wanted to be true to the film and make the app available.

“We want people to view the content, share it and understand and believe in the power of a smile and how powerful it really is,” she explained. 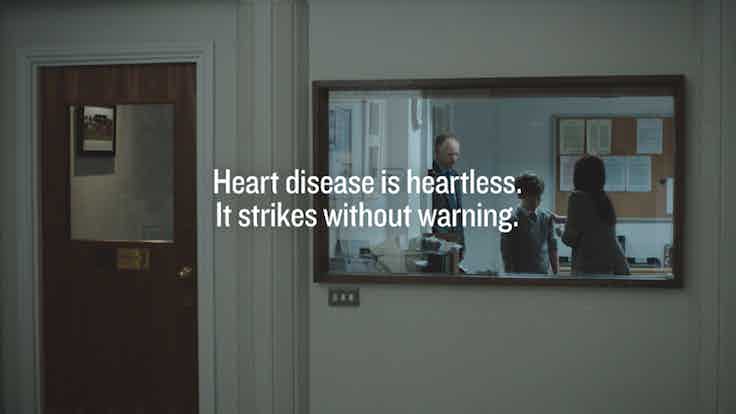 The British Heart Foundation is hoping to deliver an “emotional punch” with a new marketing campaign that focuses on the devastation heart disease can wreak on friends and families. It says it is aiming to show that it is not just a disease that effects “older men”.