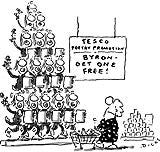 When the Arts Council agreed to award a grant to a “performance poet” at a supermarket, it was inevitable the choice of venue would be Tesco. For not only is the chain at present top of the heap, lordly ruler of the checkouts and prince among price-cutters, it is also given to periodic bouts of silliness.

Tesco alone among the retail giants pioneered nude shopping. For one night a week at its Hastings store, the windows are blackened and naturists issued with plastic aprons to prevent unsanitary contact between human organs of reproduction and organic produce.

Tesco later disclosed that retail psychologists had advised it to reduce the size of the melons to keep pace with the current fashion for smaller breasts.

Next, the supermarket announced it was subjecting cream cakes and custard pies to ballistic tests after a new craze for cake-throwing raised safety concerns.

It therefore came as something of a surprise to learn the appointment of a poet in residence – albeit for only one 24-hour session – was not Tesco’s idea; though, of course, the store welcomed the news with the excitement of a seasoned publicist.

The choice of supermarket was left to the poet, and Lisa D’Onofrio, a 28-year-old Australian based in Norwich, elected to perform her art at the Ipswich Road Tesco – the nearest to her home.

She intends to “recite near the checkout about the perils and pleasures of shopping”. D’Onofrio also plans to secrete samples of her work among the goods and invite shoppers to come up with their own verse.

Now it would take an old fogey of the worst sort to begrudge D’Onofrio a penny of her grant from the Eastern Arts Board. The figure alone – &£1,478 – is so precise it suggests detailed calculation with an eye to the avoidance of waste. After all, she has her travelling expenses, even though she lives nearby, she needs food and drink to sustain her through 24 hours of creative effort and she may, though here we are in the realms of conjecture, require a pen and paper. Anything left over should be seen as the reward for the factor of production known as enterprise. Economists call it profit. I defy anyone to deny that to extract &£1,478 of public money in return for reciting poetry at Tesco’s in Norwich shows enterprise of a high order.

Jane Moss, spokeswoman for Eastern Arts, says: “We wanted to introduce people to artists and what they do, and debunk some of the myths. What could be more everyday than a supermarket?”

Magda Russell, who boasts the puzzling title of Norfolk’s freelance literature officer (is the county so blessed with literature officers that they come in various kinds, employed and self-employed?), says the poet can be emotional, even a bit fierce. “She is quite beautiful and has a ring through her nose. She should make quite an impact.”

It is safe to assume even the metropolitan sophisticates of New Labour might reel before the impact of an Aussie poet sporting the nasal adornment of a Friesian bull and displaying a kind of emotional ferocity at the checkout. So what effect it might have on the natives of Norwich cannot be foreseen.

Much more important, though, is the poetry. I would be amazed if D’Onofrio’s verse were either to rhyme or scan. True, neither is a strict requirement of poetry, but ever since that became known outside academic circles it has been fashionable for any poltroon to pen any old gibberish and call it poetry. Worse still, they have persuaded people who ought to know better. Before anyone can assume the mantle of poet, he or she ought to be made to write in regular stanzas, with a set pattern of rhymes, and apply exceptional powers of expression to the task. Only after that test is passed should forays into vers libre be committed to print or taken seriously.

D’Onofrio may be most accomplished in crafting sonnet, elegy and ode, though, if that were the case, she would be the first of her kind to qualify for an Arts Council grant.

My nearest branch of Tesco is at Potters Bar – gateway to South Mimms. And, what with having paid my first instalment of income tax for this year, I find myself short of a bob or two. I have not yet looked it up, but I imagine the number of my local freelance literature officer will be in the Yellow Pages. So, in due course, I can expect a reasonable return for reciting some of my stuff at the PB checkout. I shall warn the shoppers, in blank verse and after the style of Ted Hughes, of the perils of what they are about.

“Darkling night and bloody badger’s grunt open Earth’s eyes to depths unseen” will be my first line. Others will follow. On a lighter note, and as a tribute to the Australian origins of the founder of supermarket bardery, I shall clip on my brass navel ring and declaim: “I weep not for you grovelling, shopping hordes, scurrying, greed ridden, with animal grunt and growl. Sod your tawdry quest for pennies-off and prices cut. My eyes are as dry as a pommy’s towel.”