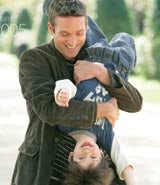 Home shopping specialist Littlewoods Even More is breaking with tradition by featuring a man on the cover of its autumn catalogue for the first time.

The company has 2 million customers, but has taken the pioneering step in an attempt to increase its share of male home shoppers, after the company’s research showed a 40 per cent growth in male customers over the past three years. The same survey shows 47 per cent of men will not shop on the high street, and 29 per cent admit to having the majority of their clothes bought by partners or female relatives.

Littlewoods claims this is the first time a home shopping company that isn’t solely targeted at men has made such a “brave move”.