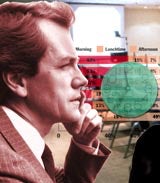 Nowhere is this more keenly felt than in the business presentations sector, where competition for time and attention is constantly increasing. New technologies such as e-mail, CD-Rom and webcasting are intended to make transactions and presentations easier, but in practice often increase the demands on our time.

What’s more, according to some, new technologies are no replacement for the greatest presentation tool of them all – face-to-face contact.

The pressure is on from the earliest stage of the presentation process – the pitch. The 40-minute presentation followed by 20 minutes for questions is no longer standard. In its place, companies often find they have been allocated just 20 minutes to make their pitch.

“In 20 minutes, you have time for only about 3,600 spoken words,” says Khalid Aziz, chairman of presentation company Aziz Corporation. “In print you can get across about five times as many words.”

Companies are increasingly being asked to submit their first-round pitches by e-mail, although “pitches are always better face to face”, believes Line-Up Communications business development director Josie Klafkowska. In the first instance, however, she admits that e-mail is acceptable.

“It is only the delivery mechanism. Clients have been asking us to send credentials by post for years. The only real difference with e-mail is that it is quicker. You don’t have to bike your presentation at 5.30 to make the 6pm deadline.”

And briefs also come in by e-mail, says Rebecca George, head of communications company August-One Connect. But she adds that she prefers to meet a client face to face in the first instance to establish exactly what they are trying to achieve. “I’d want to meet the team and get a feel for them as people,” she says.

So, direct contact is still an essential part of the presentation process, but once a rapport has been established, human contact can be backed up by other forms of communication, says George. “You can save using the people – the key influencers – until a special occasion,” she says, “and in the meantime, maintain contact through e-mail, a non-labour-intensive way of keeping in touch.”

Aziz agrees that e-mail works for people who are “already bonded through some means, such as working for the same organisation, and for people who have already met”. But he argues that ultimately there is no replacement for face-to-face contact. The Aziz Corporation is in the business of training people in presentation skills, so Aziz has an interest in singing the praises of person-to-person contact. However, his company is experiencing massive demand for training in presentation skills, so clearly the sector is thriving.

“It’s a real growth area,” he says. “Hi-tech people have become senior managers through their technical skills, but they don’t have the interpersonal communication skills. People under 30 have spent most of their lives in front of a screen instead of people, so the finer communication skills are being lost.”

Just as personal communication is being recognised as being as important as ever, so older technologies are demonstrating their importance in the face of young upstarts emerging from the technological revolution.

“Clients can become too media-oriented and forget the message,” says Paul Ashford managing director of event production consultancy Apex.co.uk. “You should always think of the message first and then of the appropriate medium to convey it.”

Ashford says that when he pitches for business, he deliberately keeps the presentation as low-tech as possible, using boards rather than computers.

“Whatever technology you use, they will judge you at that level, just as when you receive a letter from a secretarial agency, you’ll judge the agency on the quality of the letter.

“Apex uses technology for presentations at larger shows, if necessary, but it won’t wheel in acres of video projectors during the pitch for that work. Either clients understand the technology and know what they want, in which case it’s unnecessary to show them, or they aren’t into the technology, in which case they won’t want to see it either.

“When you hire a builder, he doesn’t bring along his hammer to show you. You just assume he knows how to use one. What you do want to see is references from other people telling you what he’s like to work with.”

Line-Up’s Klafkowska agrees that there is a danger of the message becoming secondary to the medium and finds this happening more frequently with that ubiquitous presentation tool Powerpoint.

“Powerpoint is a brilliant tool and has changed the way people do presentations,” she says. “But you can end up basing the presentation on what the charts say. Rather than complementing it, they become the presentation.

“Some people are tempted to use the charts to get their thought processes together when they should think first. If a client comes to Line-Up with a set of charts we might use them as the bones of the presentation, but we’ll deconstruct them first and rebuild them,” adds Klafkowska.

Ultimately, Powerpoint presentations should be visual aids for the audience, not crutches for the presenter. Aziz says: “Powerpoint slides can be the death of a presentation, especially if people just put their notes on screen. Our advice is to minimise the use of Powerpoint or even cut it out entirely. The best visual aid is yourself.”

“Line-Up tries not to put words on charts, but to use them visually and save the words for verbal presentation,” says Klafkowska, adding that while Powerpoint has become the almost universal presentation package, she doesn’t rely on it, but uses it with a number of other graphics packages. “Line-Up uses Adobe Photoshop and Illustrator to create and manipulate graphics, and 3D Studio Max for 3-D presentations. Then we use Powerpoint as the delivery mechanism,” she says.

While face-to-face meetings are essential in many sectors, other technologies, that allow presentations from a distance, are having an impact on the industry. CD-Rom, for example, is being used as a way of disseminating information to a large number of people. And it has many advantages, as Simon Staines, project manager for interactive CD-Rom specialist Cinram UK, points out.

“You put control of the presentation into the hands of the person who is being presented to. Customers can access the information they want instantly, when they have time to look at it, rather than having to be at a scheduled meeting,” he says.

“And they can take as long as they like to look at it. It may be that only 30 seconds of the presentation is relevant to them, so they can just watch that.”

Staines suggests that buyers sometimes want to take work home and it’s very easy to do that with a CD-Rom – after all, it is substantially lighter than a brochure. Other advantages over brochures are clear. CDs or DVDs sent in smart packaging will be seen as high-value products that reflect well on the company, though they may cost less than a brochure to produce and send out. Support is easy to arrange using direct Web access from a hyperlink on the disc, or telephone helplines. Discs with hyperlinks can take the user straight to the most current information on a website, so there is less danger of the information on the disk being out of date. Hyperlinks can also be used to track which parts of the CD generated the most interest, offering valuable market research.

In sales terms, concludes Staines, CDs may be impersonal but it is far easier and cheaper to mail a disk to 100,000 potential customers than to arrange face-to-face sales meetings with each one.

Another way of presenting to large numbers of people is to use webcasting. It still has its flaws but is gaining acceptance, especially when broadcasting a conference to delegates too far-flung to make it to the venue itself.

However, it’s very cold as a medium, says Apex’s Ashford: “It’s like watching opera on the TV. It never truly comes across.”

Aziz agrees that the technology is still fairly primitive and he is often being asked to train people to make presentations that will be effective when broadcast over the Web.

“You need to speak with even more passion than in a live presentation, because there are two layers of glass between you and the audience. You need to be more expressive, speak more slowly and pause more effectively,” he says.

Ashford points out another factor hampering the progress of webcasting. People still have security concerns about the Internet and tend to shy away from broadcasting confidential information over the Web. Once the security issues are resolved and there is more widespread use of broadband and other communications technologies that allow broadcasting in real time, webcasting and videoconferencing will gain acceptance.

Until then, despite the time pressures on everyone and the host of presentation technologies on offer, there is no substitute for getting together in a single space and allowing the listeners to see the whites of the presenter’s eyes.