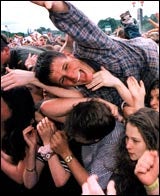 Mintel International’s report Music, Live Concerts and Festivals looks at how the £361m live music industry differs from the recorded market. The live music sector is being affected by four main factors: the significant rise in disposable income, the decline in student income, the importance of live music as a leisure activity, and the growing impact of pop music.

In the UK, music is a high-profile industry and a successful export. UK artists are estimated to hold a share of ten to 15 per cent of total global music sales.

Attendance of live music concerts and festivals fluctuated slightly between 1992 and 1999. Rock and pop concerts and festivals dominate the market. Tours by popular groups at the biggest venues, such as Wembley Stadium and the Milton Keynes Bowl, attract a huge spend, with the Rolling Stones and Celine Dion holding the highest grossing concerts.

Men make up the majority of attendees at rock/pop concerts but the number of women at classical concerts is consistently higher.

The highest demand for live music comes from the under 35s, with a large proportion being from the 15- to 24-year-old age group. Students provide significant demand for the music industry but government loans and restrictions on local authority finance have curbed students’ spending on live music.

Consumer research commissioned by Mintel reveals that there is a high concentration of concert-goers in major cities, particularly among the well-educated and those with high disposable income and no dependants.

Classical concerts appeal to an older, more discerning audience, mainly in London and the South. The profile of jazz concert-goers is similar to classical concerts, reflecting the music’s niche appeal.

In the rock and pop sector, there have been several festival failures in the past few years, notably the Eclipse and Phoenix festivals in 1999.

Despite this, the sector remains vibrant. Long-established festivals have become high-profile events because of heavy TV, press and radio coverage and the sheer scale to which demand has grown. Glastonbury, T in the Park and Reading remain hugely popular, selling out quickly and attracting the biggest UK and international acts.

In the classical concert sector, the most popular events are local or London-based festivals, including The Proms and a series of concerts at well-known venues such as The South Bank Centre and the Barbican. These concerts command the largest audiences and highest media profile.

The rising cost of holding festivals, increased demand for big-name acts and consumers’ demands for more facilities have driven the cost of tickets up since the mid-Nineties.

In contrast, tickets for indoor concerts rose in line with inflation because the format of these events have remained the same.

Consumer expenditure at live music events incorporates merchandise, catering and music sales. Mintel’s consumer research reveals that more than twice as many concert-goers purchased food and drink – the most lucrative items – than programmes.

The rise of home Internet usage, coupled with technological improvements in the average home PC, have meant that music websites have been able to expand their service to offer webcasts and an outlet for ticket sales.

Although Ticketmaster and venue box offices dominate the music concert ticket buying market, the channels through which concert goers buy tickets are expanding. This is largely because venues, acts and promoters are developing their own websites.

The promotion of live music is competitive. The demise of Allied Entertainment Group at the end of 1999, and the arrival of SFX – the largest leisure promoter in the US – in the UK has highlighted the uncertain nature of the market.

Consolidation is occurring in the market with the buyout of major UK promoters such as Marshall Arts, Barry Clayman and Midland Concert Promotions. The effect of this has yet to emerge, and further acquisitions are predicted.

There is growing concern that the industry will become dominated by the larger players, which will promote big acts and increase prices, without allowing revenue to filter down to the smaller acts and new talent.

Nevertheless, demand for live music will remain buoyant. The UK economy will fare well in the short term as disposable income and consumer expenditure on leisure pursuits rises further.