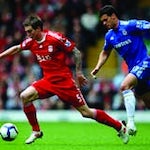 The direct marketing campaign, created by Iris, is targetting the 88,000 fans that are members of its ’All Red’ official membership scheme.

The seat allocation available to ’All Red’ members each game is rising from 5,000 to 8,000. A number of creative executions in the shape of a seat from Anfield stadium are being sent out to all members.

Iris creative director Pete Armstrong says: “If All Red membership gives you the chance to get your hands on a seat at Anfield, what better way to dramatise this than to make the DM an actual reserved seat that drops through your letterbox? And when you fold down the seat all the relevant information on how to get your hands on one in Anfield itself is printed on the interior.”

The campaign will be supported by online advertising and eDM, along with ads drawing attention to the scheme in match day programmes and Liverpool FC club magazines.

Liverpool FC could be sold before the end of the month following intensified interest in buying the club.

The Reds’ chairman Martin Broughton says the club will look to conclude a sale before the transfer window closes on 31 August after receiving “several” offers.

Chinese businessman and chairman of Hong Kong-based QSL Sports Kenny Huang is said to have approached the club’s bankers. The Kuwaiti-based al-Kharafi family are also rumoured to have a bid on the table.