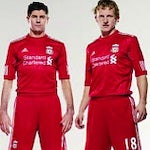 The Reds’ chairman Martin Broughton says the club will look to conclude a sale before the transfer window closes on 31 August after receiving “several” offers.

Chinese businessman and chairman of Hong Kong-based QSL Sports Kenny Huang is said to have approached the club’s bankers RBS and Wachovia as well as Broughton about buying the club.

Huang is understood to be interested in buying the £237m debt owed to RBS, or buying the club outright.

The Kuwaiti-based al-Kharafi family is also believed to have approached Broughton and Barclays Capital, which has been appointed by Tom Hicks and George Gillett to oversee the sale of the club.

Premier League football is massively popular in Asia and Liverpool already have a large fan-base there.

The club signed a £80m four-year deal with Standard Chartered Bank last year with the intention of using the bank’s Asian stronghold to help “increase the family of Liverpool fans”.

Liverpool fans will be happy to see the end of the Hicks and Gillett. Supporters have become disgruntled with the debt accumulated by the pair in their three-year reign at the club.