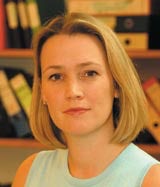 Hockin will report to Matthew Timms, who was appointed to head the banking group’s internet division in February this year.

Hockin was in charge of Affinity’s Breathe.com portal and oversaw the launch of a range of internet, mobile and fixed-line products, including Sainsbury’s HomePhone.

She also advised companies such as Powergen, HFC Bank and Tiny Computers on product and marketing strategies for so-called “white label” services. These are online services created and managed by Affinity, but branded with the client’s identity.

Lloyds TSB has been fighting back against online-only services and accounts, such as ING Direct. Earlier this year it launched its Plus account, which pays a higher rate of interest to customers who only access it online. It has also made significant investments in the online insurance market, selling its own insurance through insurance.co.uk and owning aggregator site screentrade.co.uk.

The Lloyds TSB group is one of the UK’s top online financial advertisers. It uses sites such as Yahoo!, Google and Motley Fool, particularly for sponsored links. Timms has said he has no plans to change this strategy.

Midlands-based airline bmi has signed up to become the official airline of Premier League champions Arsenal. The deal gives the airline the right to use the club’s logo, name, trademark and imagery across all bmi marketing materials and also allows access to Arsenal’s supporter database. Bmi claims that the deal, for an undisclosed sum, is […]