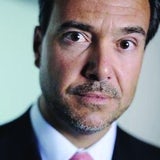 Horta-Osório (pictured) will replace Eric Daniels next March and take on overall responsibility for Lloyds brands including Lloyds Bank, Bank of Scotland and Halifax.

His appointment will be a surprise to many investors and analysts. UK retail banking head Helen Weir and finance director Tim Tookey have been widely tipped to take over from Daniels.

Horta-Osório has been chief executive officer of Santander UK since 2006. He has overseen Santander’s expansion in the UK that began with the acquisition of Abbey National and continued last year with the acquisition and integration of Alliance & Leicester and the Bradford & Bingley savings business.

Daniels marshalled Lloyds’ takeover of HBOS in 2008. The acquisition forced Lloyds to seek £17bn of state aid, which has left it 41% owned by the Government.

Bad debts have blighted Lloyds since the HBOS takeover but the group said yesterday (2 November) that it was profitable in the third quarter and expected to stay in the black for the full-year.