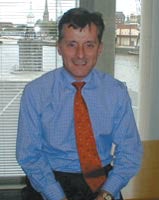 Herrington, who has been with the company for more than 20 years, was previously area director of business banking for Lloyds TSB Surrey and North Sussex. He replaces Charles O’Neill, who has been appointed country manager for Panama in the company’s international banking division.

Herrington will focus on developing the bank’s small and medium enterprises strategy. He will report to managing director of business banking David Singleton.

Two other senior marketers, Richard Everett and Mike Bulpitt, have since retired. Their responsibilities have been assumed by Steve Gibbons, who has become head of group marketing.