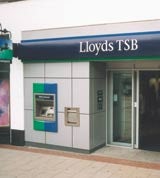 Lloyds TSB has launched an integrated telephone, electricity and gas account under the sub-brand Ideal.

The high street bank becomes the first in the UK to offer such an account. It has teamed up with Scottish Power and Cable &amp; Wireless to provide the services, but the offering will be branded as a Lloyds TSB product. The service is not limited to consumers who bank with Lloyds TSB.

Consumers will receive a monthly bill showing both telephone and energy use, which must be paid by direct debit.

The bank claims it is able to use its buying power to provide consumers with a better deal. The service will initially be marketed within Lloyds TSB’s 2,000 branches, but this could be extended to a fuller campaign later in the year.

Under the arrangement with its partners, Lloyds TSB simply markets the services under its brand.

The deal is the second affinity partnership for Scottish Power, which also provides gas and electricity to Sainsbury’s Energy.

Other financial services companies have attempted to diversify: Britannia Building Society offers a home removals service and a referral service to approved plumbers and builders.

Reebok’s new strategy may have cost it its UK marketing chief, but there are signs the brand’s efforts to introduce global consistency are paying off. But will product innovation let it down at the last hurdle? asks Caroline Parry

The Wrigley Company is taking its first step outside the chewing gum market with the launch of Xtra Mints in September. The move is part of Wrigley’s strategy to diversify from it core products to become a confectionery company. The sugar-free range will be available in two flavours, spearmint and peppermint, and will retail at […]

First the bad news: Dave Brunswick’s article opposite shows the sordid reality behind spam. His dogged determination to make supposedly blue-chip, legitimate marketing companies see the error of their ways is to be congratulated. Brunswick’s sleuthing has revealed the complete lack of control that even the biggest companies have over spam. By handing responsibility for […]