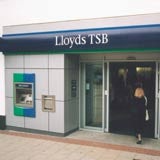 He fills a position left vacant since January, when Georgina Smith was poached by Orange to be its head of brand.

Mazzocchi will report to Lloyds TSB director of group marketing and UK retail banking strategy Helen Stevenson, who joined the bank in January from Masterfoods, where she was European marketing director.

At Visa, Mazzocchi was a senior brand manager with responsibility for Italy. He leaves the company this week and Visa has not yet found a replacement.

Like rival Abbey National, the bank is selling peripheral parts of its business to focus on core high street retail services in the UK.