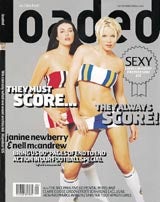 IPC lad mag Loaded and Flextech-owned men’s channel Bravo are close to finalising a masthead TV deal which will bring the title that galvanised the men’s magazine sector to television for the first time.

The series of 12 short programmes will feature male lifestyle interests such as sport, travel and women. The two companies are also studying proposals for a joint festival event. The deal is being negotiated by Flextech director of brand development Jonathan Webb and IPC head of TV Nick Ryle.

Ryle says: “Both brands are after the same young men’s market. Flextech has some sharp ideas about where we can take Loaded, and we are interested to see how they develop.”

Webb adds: “IPC and Bravo have a growing relationship. We hope the partnership will continue to grow stronger.”

The programmes are scheduled for production in autumn, and will be screened in the winter.

IPC says that the talks with Flextech are not exclusive and that it is discussing treatments for the title with other broadcasters. However, these talks are the most advanced.

In a separate development, IPC’s Practical Parenting and Flextech’s women’s Living channel have signed a masthead TV deal to produce 28 five-minute slots on parenting tips. This deal follows on from a series of 12 slots screened last year.