The former Prime Minister is giving evidence to the Chilcot inquiry into the Iraq invasion, with members of the public invited to attend on a ballot basis.

The digital posters have been targeted for members of the Iraq Inquiry Committee to notice on their way to work.

The ads, featuring a distorted picture of Tony Blair’s face being punched cartoon style accompanied by words such as ‘Pow’, ‘Bif’ and ‘Wham’ carry the line ‘We have 12,243 questions we want to put to you Mr Blair’, followed questions posed by the public including: ‘What facts were the WMD claims based on?’ and ‘Did you just want regime change?’. They have been created by ad agency Hurrell Moseley Dawson Grimmer (HMDG).

Hannah Lownsbrough, campaign director at 38 Degrees, says: “Our aim is to make sure that Tony Blair faces tough questions at the Iraq Inquiry. It should be a chance to make him answer for his decision to take us into war, but there’s a risk it could be another whitewash. We’re building the pressure and make sure that they know exactly how many of us want tough questions. We’re very pleased to be working with HMDG. This campaign will give the demands of our members the highest possible profile prior to Tony Blair’s appearance at the Iraq Inquiry.”

Jamie Inman, planner at HMDG, adds: “We’re excited to be adding to the pressure on the Iraq Inquiry as part of 38 Degrees highest profile campaign to date.” 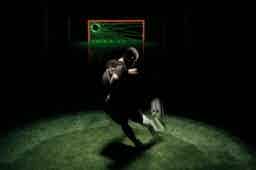 Footballers Wayne Rooney and Fernando Torres are to star in a television campaign for Nike’s T90 Laser III boot.

Most of my working life to date has been preoccupied with trying to understand why consumers have done what they did, and to attempt to shed light on what they will do next. This has always been difficult because the market research data available has generally been sparse, rather out of date and sometimes horribly […]