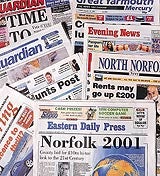 The regional press is the UK’s second-largest advertising medium after television, and has recently been enjoying significant growth. Despite this movement towards regional press, a consultation exercise undertaken by the Newspaper Society reveals that proof of its effectiveness is still a major issue for 52 per cent of advertisers and agencies.

There are about 1,300 regional and local newspapers in the UK – mornings, evenings, weeklies, paid-for and free – that are read by 84 per cent of UK adults.

This week – Local Newspaper Week (June 20 to June 24) – the Newspaper Society released some findings from the largest piece of advertising effectiveness research ever commissioned by the regional press. Called The Conversion Study – conducted by Millward Brown – the survey says that it demonstrates how advertisers can tap into the strengths of the regional press to generate brand awareness, create demand and move consumers along the buying cycle. The Newspaper Society hopes to attract new advertisers to the medium, following the finding that local press increases brand awareness by nine per cent on a multimedia schedule. The research involved both daily and weekly regional newspapers in four regions of the UK, and up to four local brands and six national brands were tracked in each region for the duration of the study.

Starting from the time when a brand advertises in the regional press and continuing over the next five months (the period during which the survey was conducted), the average increase in awareness was ten per cent, with a maximum increase of 29 per cent. Nine out of ten brands involved in the study managed to achieve a significant increase in awareness of local press advertising.

The report adds that by identifying the respondents who see the relevant advertisement in isolation, it is possible to calculate the discrete awareness achieved by regional press. For instance, if a brand is advertising on TV and in the local and national press, the additional coverage generated by local press is the percentage of respondents who have seen local press advertising, but not any other advertising for that brand.

The study also seeks to explore whether straightforward awareness of the regional press advertising is transferred into positive attitudes towards the brand. It asks whether there is an increase in “familiarity” (how much have consumers heard about the brand/ did they visit/ use or buy it?) and “consideration” (would they consider buying/ visiting/ using the brand?) as a result?

The Newspaper Society’s study says that a majority of respondents had already heard of most of the brands that advertised in regional press. However, during the five months of the regional press advertising campaign, the percentage of respondents who reported advanced levels of familiarity (heard about a lot/ visit a lot/ used a lot) increased from 70 to 80 per cent.

In terms of consideration (would consumers consider buying/ visiting/ using the brand after it has been advertised in the regional press?), the following results were found. A quarter of the brands increased consideration to significant levels, with an average rise of six per cent. Some of brands experienced a rise of 18 per cent.

These findings reveal that regional press ads do cut through to consumers (nine out of ten regional press campaigns work effectively for the advertisers), and these high levels of recognition translate into an increase in brand familiarity and propensity to buy.

The research concludes that whatever the objective of an advertising campaign, whether converting from ignorance to awareness, or awareness to conviction, regional press has a role to play. The results indicate that advertising in regional press works for all the sectors involved, including packaged goods and retail, both tactically and strategically.

These initial findings will be included in the full Conversion Study to be published later this year.