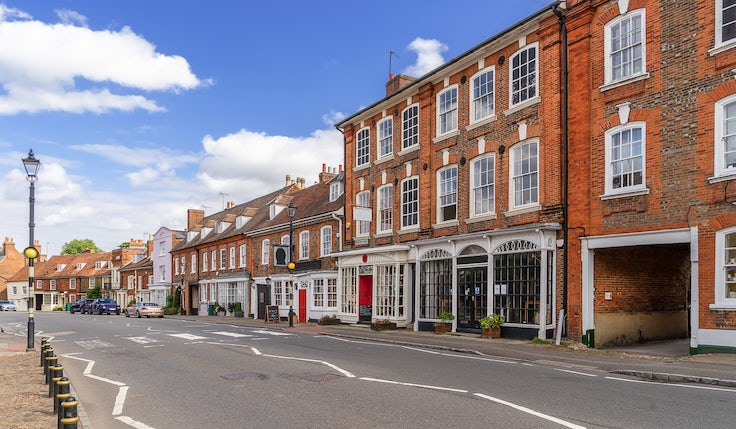 Last week the BBC ran a headline on music retailer HMV’s plan to reopen 10 stores, including a flagship central London location. I wasn’t entirely convinced by the new owner’s faith in what he termed the “vinyl revival”, but the business correspondent covering the story was even more downbeat.

Over predictably gloomy footage of shuttered branches of Woolworths, he solemnly intoned about “the death of the high street” and questioned HMV’s Canute-like behaviour in the face of – in his view – inexorable decline. The bald figures are depressing: 1,400 retailers have entered administration since 2010.

The pandemic has been painted as a final stake in the heart of physical retail, facing a perfect storm of forced closures, plunging sales and an accelerated shift to online shopping. At the height of the first lockdown, half of all fashion sales were taking place online, and a third of all retailing. It looks like curtains for the high street, doesn’t it?

Actually, quite the opposite is true, as any critical evaluation of the data (and at Jaywing, we love a bit of data) will reveal. The trick is to look past the easy headlines, and to think about distinct retail sectors rather than the glib catch-all of the ‘high street’.

Viewed this way, we’ve seen wildly different fortunes for distinct segments of the retail ecosystem. Destination malls, retail parks, city centres and suburban or small-town high streets have performed very differently. It turns out that the true survivors and thrivers – the cockroaches of retail Armageddon – are the local high streets, that most unfashionable and unglamorous layer of the retail pyramid.

This resilience is borne out by the numbers. The 12.5% high street vacancy rate has remained constant since 2013, implying that individual outlets may have struggled, but the high street as an entity is capable of constant reinvention.

It’s not just the brutal transfer of trade from the cities fuelling localism, but longer-term trends too, involving a more community-minded attitude to shopping.

Fragmented ownership, relatively low rents and lack of central co-ordination were in the past regarded as weaknesses of the high street model. Now it’s possible to see them as strengths – enabling experimentation and fast failures, as local high streets evolve rapidly to meet the needs of their communities.

If Covid has given ecommerce a booster, it’s bound to have an even greater and more permanent effect on the local high street. No one’s certain about the future of the office, but a conservative prediction of a permanent shift to a four-day office working pattern would see potentially 20% of the lunchtime and evening spending of city-centre workers transferred to suburban high streets.

This shift doesn’t even factor in the millions of new self-employed – mostly also working from home – opting for this lifestyle, either through pandemic-driven redundancy or a re-evaluation of personal priorities and ambitions. None of this is temporary. Zoopla reports house prices rising at their fastest rate for 17 years, driven by families moving out of bigger cities to find the space to support a new working-from-home lifestyle.

It’s not just the brutal transfer of trade from the cities fuelling localism, but longer-term trends too, involving a more community-minded attitude to shopping. A recent Deloitte survey showed that 57% of people claim they’ll spend more money with businesses selling locally produced products in future.

As well as the shift from city centre to further afield, there’s an important shift in what we buy. Broadly the move is from ‘stuff’ to ‘self’. Since 2013 the top 10 categories in terms of net growth in store numbers relate to spending on the ‘self’ rather than selling physical products. Think nail salons, coffee shops, restaurants and, above all, barbers – the single fastest growing category of all. None of these experiences can be ordered online, let alone delivered; a trump card in the battle of bricks versus clicks.

One of our clients at Jaywing is a microcosm of some of these trends. Rohan pioneered the category of high-performance ‘technical’ clothing for outdoor enthusiasts and global travellers nearly 50 years ago. As well as running a thriving ecommerce operation, the brand is committed to a network of over 50 stores nationwide, mostly located in market towns and rural locations handy for the magnificent scenery and walking territory beloved by its customers.

It operates a handful of flagship stores in metropolitan cities – including Covent Garden in London – but you’ll also find them in places like Ambleside, Bakewell, Stow-on-the-Wold and Keswick. Since being allowed to reopen, those very different locations have enjoyed different fortunes.

A valid comparison is with 2019 – pre-Covid. Some stores are doing better, some worse. Most of this underperformance is accounted for by just a fraction of Rohan’s estate – and it’s those big-city stores, including London, Manchester, Edinburgh and Glasgow. We can discount regional effects too; sales at the store in the centre of Manchester have dipped significantly, while 15 miles away, Rohan’s sales in the small commuter town of Knutsford have done just the opposite.

I’m not betting on that “vinyl revival” saving HMV, but the future for the local high street looks pretty good from here.

Adrian Langford is director of strategy and planning at Jaywing.