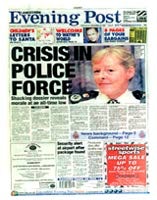 This week is Local Newspaper Week when the Newspaper Society (NS) will be celebrating the important role local papers play in communities across the UK, and encouraging national advertisers to make the most of their potential.

The UK’s regional press – which has over 1,300 titles – is thriving. Trading on the core values of trust and relevance, the medium has gained half a million more readers in the past year, and according to a recent Future Foundation report called The Renaissance of Regional Nations, it is in a strong position to serve its communities well into the future as the demand for local content is expected to grow.

Commissioned by Harrison Cowley in association with NS Marketing, the report examines the local effects of globalisation and looks at how successfully all levels of media are responding to the challenges of the political, economic and cultural resurgence in the UK.

The report finds that almost every major element of a person’s life is lived within a 14-mile radius of home. The average person will travel 3.1 miles to school or the local gym, 3.5 miles for grocery shopping, 5.3 miles for car repairs, and 6.8 miles to go to the cinema. Even to make major purchases such as computer equipment, furniture and carpets, the average person will travel less than nine miles. Not surprisingly, therefore, the attachment to our locality is strong – over half of us live within a 30-minute drive of our birthplace and 90 per cent of people go less than ten miles when moving home.

According to the report, the need to be part of a community has become stronger. Forty-eight per cent of people interviewed in 2000 expressed a strong or moderate need for involvement in the life of their community or neighbourhood, compared with 45 per cent in 1980.

The Future Foundation predicts that in the future, time pressures and the rise of home working will make the local environment even more important for both personal and business reasons. Already, more than 50 per cent of people work from home at least occasionally, and as the number of overall workers is forecast to increase steadily over the next five years, the number of home workers is likely to increase.

While local environments are becoming more important to people’s everyday lives, they are also diversifying. Each region of the UK displays unique characteristics in heritage, infrastructure, industries and population which give rise to regional variations in behaviour and opinion.

The Future Foundation study based the spread of opinions on the deviation from the UK average across 33 randomly selected attitudes, concerns, needs and opinions. In 1980 the North and Scotland were the most attitudinally distinctive regions of the UK, but they have become significantly more distinctive in the past 20 years. In 1980 London and the South-east were closest to representing the UK average in attitudes; in 1999 the North-east and North-west showed the lowest level of difference in their opinions and concerns.

Local newspapers have an essential role to play in local identification and local living. They adapt their news to suit local areas and respond to the individual needs of their communities. This is why regional press outscores all other media when it comes to “understanding my lifestyle and concerns”. One in five adults would not want to be without their regional or local newspaper compared with 14 per cent for national press and 13 per cent for BBC TV. Sixty per cent of the business community believe regional newspapers are the most useful source of local business news.

Community affiliation and local living create the desire for local media that not only offers targeted information but also expresses the issues important to the particular community. Local papers come out on top when people are asked which form of media they consider to be “on their side” and two-thirds of people feel that the local paper plays a vital role in fighting for the interests of the local community.

Linked to this is the issue of trust. Regional press is considered by the public to be the most trustworthy of all media (24 per cent) followed by BBC TV (18 per cent), any radio with advertising (13 per cent) and national press (12 per cent).

This trust relates not just to the news coverage but also to the practical reliance people have on their local newspapers. When asked which media they considered to carry helpful advertising when deciding where to go or what to buy, local free weeklies (listed by 56 per cent) outscored national papers, TV, magazines, leaflets, local radio and national radio. When questioned about their frequency of acting on advertising in different media, 30 per cent claimed they acted on regional press ads at least once a month, compared with national press (12 per cent), local radio (six per cent) and television (nine per cent).