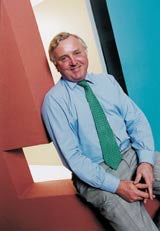 The merger of True North networks FCB Worldwide and Bozell Worldwide is likely to lead to the restructuring rather than merging of their London agencies, according to sources close to the deal.

In the UK, Banks Hoggins O’Shea/FCB will handle the international clients, leaving much of Delaney Fletcher Bozell’s UK business in a separate agency.

Delaney Fletcher Bozell chairman Greg Delaney and his senior staff argue that a complete merger would be bad for the network in London.

FCB Worldwide international president Harry Reid says: “Every country has it own particular situation. It is not the case that every market will have a single agency.”

Delaney is understood to be unhappy about taking a European creative director post. Friends say he is not prepared to accept the job, or report to Banks Hoggins O’Shea/FCB chairman John Banks, who is likely to head the merged London agency.

Meanwhile, insiders say Delaney Fletcher Bozell chief executive Mark Lund may decide to stay with Delaney, with whom he has a close working relationship, rather than take a position in the lead agency.

There would be considerable conflicts of interest if the two agencies were merged, namely IPC Magazines and John Brown Publishing, Save &amp; Prosper and b2, and CIC Video and Buena Vista Home Entertainment.

Delaney and Banks are on the steering committee that will integrate the two agencies. It is expected to report within ten days.

Delaney says: “I cannot comment on whether a separate agency will be set up.”

The Institute of Sales Promotion (ISP) has launched a campaign to save “buy one get one free” (bogof) offers and other promotions from the threat of European legislation. The ISP claims the European Commission is planning to outlaw some of the UK’s most popular promotion techniques, including “bogofs”, prize draws and other in-store promotions. Earlier […]

Advertiser-funded programming is an undervalued resource offering huge brand exposure. Kevin Brown explains why the medium is poised for growth