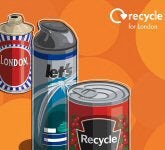 The Mayor of London is launching a campaign on supermarket baskets to encourage shoppers to recycle more. It launches this week.

The Recycle for London campaign aims to highlight the fact that 75% of products that are in supermarket shopping baskets can be recycled. It will also prompt consumers to use recycling facilities at supermarkets.

It will target 25 million shoppers through Redbus Outdoor’s network in 200 Sainsbury’s, Tesco and Somerfield stores.

The campaign will tie in with the release of new animated film Flushed Away, which tells the story of animals that live on the Underground and make their homes out of rubbish.

Harry Barlow, the Mayor’s communications advisor, says: “Supermarkets are now taking recycling seriously. By targeting shoppers at the point of purchase, we can ensure that they also get the message that they can do their bit for the environment.”

The campaign has been booked by outdoor operator Kinetic and Mediaedge:cia.

Help the Aged is supporting a new social community website that encourages members to share their life stories and helps them stay in touch with friends and family. The site, meRemembered.com, will also allow users to search its database for old acquaintances and members can also set-up online “memorials” for relatives that have passed away. […]

Heinz has appointed McCann Erickson and M&C Saatchi to handle its 10m advertising account in a blow to Beattie McGuinness Bungay, the only roster agency left in the pitch. McCann will handle the majority of the business, including baked beans and tomato ketchup, and M&C will work on the Amoy brand and new products.

Audi marketing chief Nigel Brotherton (pictured) has left the company after just a year to return to Volkswagen. Brotherton, who joined Audi as head of marketing in October last year (MW September 15, 2005), left to become head of loyalty at VW earlier this month…