When news of the division’s sell-off emerged, staff were warned to expect job cuts (MW September 28), and once the Carphone deal was announced, AOL president of Europe Karen Thomson left. The brand subsequently called a review of its £25m advertising account, held by Grey London.

But change is nothing new to AOL.

It first launched in the UK in 1996 as the European arm of America Online. The internet service provider gave many UK consumers their first experience of the World Wide Web. Then, amid much fanfare, the company bought Time Warner to create AOL Time Warner in 2001 – a move the two companies saw as bridging the divide between onand offline communications and entertainment.

The deal proved disastrous and became a symbol of the dot-com bubble. After the merger, profitability at America Online dropped and AOL Time Warner reported a loss of $99bn (£63bn) in 2002 – the largest loss ever reported by a company. Now, while the two companies are still linked, they operate under their own brand names and their fortunes have fared slightly better.

AOL UK director of brand marketing Timothy Ryan says the merger was the result of “commercial rather than strategic decisions” and occurred at a “crazy time” for the market. “With the benefit of hindsight we can say it was a mistake, but we’ve brought the brand back,” he says. 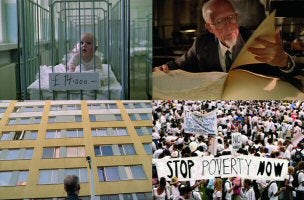 Yet Tim Mortimer, of Mortimer Whittaker O’Sullivan (MWO), the agency that launched AOL in the UK, believes the brand’s woes were not just the result of the dot-com fall-out. “We actually relaunched the brand in 1996,” he says. “AOL had in fact launched in 1995, but it was very low key and no one had heard of it. The campaign was too highbrow and nerdy. People were scared of the Net when AOL launched, and we realised there was a great opportunity to gain a foothold in the middle ground, taking the AOL brand to families and children. They did not know their market.”

Mortimer explains that his agency advised using AOL, rather than America Online, as the brand name due to negative connotations and because “it was too confusing”. MWO also created the Connie character to give the brand a friendlier, more approachable image. “Everyone hated her,” admits Mortimer. “But she worked.”

Ryan says things have changed significantly and that recent advertising has sought to move beyond the “nannying” perceptions of the past. “Connie was right at the time, she tapped into what was needed,” he says. “But AOL hadn’t evolved quickly enough. When I first joined two years ago, it had stagnated. We needed to adapt and tap into cultural changes.”

This need for change prompted the Discuss campaign, created by Grey, which Ryan hails a success and says gave the brand an edgier feel. But Mortimer slams it as irrelevant, adding: “People have been online for years now and it’s part of our lives. The Discuss strategy came too late.”

He says it was not the first time AOL had been late to the party. “It was very assured of its place,” adds Mortimer. “When Sharon Lang joined as marketing director, we proposed positioning AOL around broadband, about the time BT was moving to broadband. But she told us she saw no future for broadband in the UK. There was an inability to see where the market was moving. The rest is history.” MWO now works with Tiscali, which it picked up in 2003.

AOL has more than 2.2 million customers in the UK, 1.5 million of whom have broadband. But this figure has not increased significantly since 2002 when it had 2 million subscribers – many say this is because of its high price structure.

But Ryan says higher price points have not hindered the brand: “We launched our wireless broadband product in July at a price premium, while others were ‘free’. We outsold them all.”

Yet Ryan is keen to look to the future. He does not see the Carphone Warehouse sale as affecting brand perception, despite customer service issues. “It only has use of the brand name for access for two years. AOL will focus on the content and moving the brand forward. The AOL brand is solid and reliable. We will look to inject those values into the Web 2.0 services, such as social networking. We can’t just jump into the teen market, as we have no credibility there, but our strength and heritage will stand us in good stead. We need to take Web 2.0 services and take them to the mainstream.”

With online content such as AOL Sessions streaming live and exclusive gigs with established and new bands, the brand aims to tap into the lucrative and essential youth market and it appears to be making small steps in the right direction with its content.

As for Carphone’s influence on AOL, Mortimer is clear: “Carphone has some catching up to do, but it knows the market and is dynamic. It’s a great move.”

Methodology
YouGov, owner of BrandIndex Measures, is a full-service agency, pioneering online market research and public consultation. Using proprietary consumer and specialist audience panels, YouGov operates in the UK, North America and the Middle East. It has an established track record of accurate and high-quality survey data, expertise in constructing nationally representative samples online and developing consultation and deliberative research techniques. The launch of BrandIndex in 2005 underlined YouGov’s reputation for innovation, and the service now counts some of the UK’s largest brands among its subscribers.

BrandIndex is a daily measure of public perception across 32 sectors and over 1,100 brands, which are measured on a seven-point profile, and data is delivered next day. For BrandIndex, YouGov interviews 2,000 people each weekday, more than 500,000 interviews a year. Respondents are drawn from YouGov’s proprietary online panel of more than 130,000 UK respondents. For full methodology see www.brandindex.com