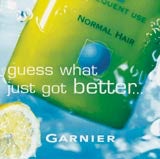 The 24-product range will be rolled out to retail outlets in January, supported by a &£1.5m television and print advertising campaign. Publicis will create the creative advertising for the launch, with media buying handled by IPM.

Industry sources say the brand will be positioned against other youth-targeted hair colour brands, such as Schwarzkopf’s Live. The brand will also compete against another L’Oréal-owned “youth” brand, Feria.

An industry insider says that it is not unusual for L’Oréal and Garnier brands to target the same customers. He says: “Both brands are looking to sell to teenagers and twentysomethings, although they have a different look, of course.”

There are already several sub-brands under the Garnier label in the hair colour market. Garnier Nutrisse is aimed at older customers to colour grey hair, while other products include Movida, Natea, Belle Color and Blonding.

The launch of 100% will be overseen by Michael Tanguy, who was promoted to general manager for Garnier from the position of US marketing director for L’Oréal Paris in earlier this month (MW last week).