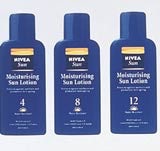 Cosmetics rivals L’OrÃ©al and Revlon are to flood the market with suncare products, in an attempt to cash in on the lucrative sector just before the start of the holiday season.

It is the first time that both companies have launched their own suncare ranges in the UK.

L’OrÃ©al already has the Ambre Solaire range of suncare products in the UK, but it will be the first time it has rolled out L’OrÃ©al-branded suncare products. The range will be called Solar Expertise.

Revlon has signed a licensing deal with Malibu Health Products, which has set up a separate company called Laboratoire Floride, to distribute Revlon’s range of products. Revlon SunCare will be sold in Boots from February 17.

Laboratoire Floride senior product manager Michelle Zuther says: “Laboratoire Floride and Malibu Health Products are two separate companies. The Malibu range of suncare products is aimed at the budget end of the market, but Revlon SunCare will target the middle-priced or the premium market.”

Rival Beiersdorf, which manufactures Nivea products, recently sparked controversy when it teamed up with Cancer Research UK. The tie-up attracted criticism from campaigners who warned that sunscreens may increase the risk of skin cancer by encouraging consumers to spend more time in the sun than is healthy (MW last week).