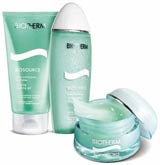 L’OrÃ©al is to sell its Biotherm brand in the UK for the first time. The brand has more than 250 water-based beauty and skincare products under its name.

In an unusual move for L’OrÃ©al, the company has appointed non-roster agency TBWA Connections to run its media buying and planning for the ad campaign backing the launch, rather than using incumbent Universal McCann.

The work will be carried out by Manning Gottlieb, which part-owns TBWA Connections, despite the fact that it also does work for rival EstÃ©e Lauder, through its M2M subsidiary. L’OrÃ©al’s roster agency Publicis will create the ads. The Biotherm range is well established globally, but up to this point was unavailable in the UK.

In another departure for L’OrÃ©al, the company is opening its first dedicated Biotherm shop, at the Bluewater shopping centre in Kent.

L’OrÃ©al is also to tie up with a number of “trendy” brands to promote the range as aspirational. It will sponsor events held by surfing label QuikSilver and record label Hed Kandi, and is planning a string of Biotherm branded club nights. The brand will also be a sponsor for the Glamour magazine beauty awards.

Biotherm offers men’s and women’s face care, body care and sun care products. All products in the range are based on an extract of plankton found in spring water from the French mountains. Thousands of products face the chop at Safeway as part of the rationalisation of its ranges under new owner Wm Morrison.

Sources on the integration team between the two supermarkets say that up to 25 per cent of Safeway’s product range could be delisted as responsibility for category buying at Safeway is handed to Morrisons’ staff.

The cull will most affect brands that carry a large number of variants, as well as tertiary brands that have not been listed by Morrisons, which has a much smaller portfolio of products in its stores.

A Safeway source says Morrisons has no intention of increasing the number of products on its lists despite the fact that it now owns larger Safeway supermarkets.

Morrisons has already slashed prices on over 800 Safeway products to bring them in line with its pricing strategy.

The supermarket launched an ad campaign this week to promote the price cuts, which was created by Morrisons’ roster agency BDH/TBWA.

One member of the integration team says large ranges, such as Lever FabergÃ©’s Lynx, are likely to be whittled down to their core profitable products.

“A range harmonisation was inevitable,” he says. “Suppliers have to be resigned to the fact that they aren’t going to be able to stock as many products in our supermarkets as before.”